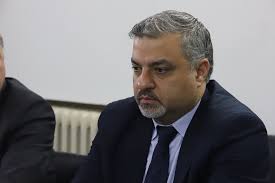 Perhaps it is the first time that a Syrian minister in the current government comes out and provides us with reassurance, albeit briefly, of what is coming, in light of all the blurry and confusing predictions; predictions that some have been working day and night to broadcast, sometimes through the enemies of the country and sometimes through the country’s merchants who exhibit exceptional cases of greed and exploitation.

The Syrian Minister of Finance, Kinan Yaghi, declared clearly that “2021 will definitely be better than 2020 at the economic level.”

Yaghi stressed that his predictions were based on information and not speculation, underlining his optimism that the next year will be a good year.

Perhaps we desperately need an official like the Minister of Finance to tell us something, no matter how brief, about the future and inform us of what is to come.

However, we would have liked for the minister to have given us an expanded overview of our economic conditions and further expanded on how the direction of the Syrian economy will be able to get out of the condition it is in, and the steps to follow to come out of this difficult living reality unscathed.

We would have wished that the minister had explained more about what he had asserted when he said that the coming year will be financially better than the year that passed, and that he would explain to us what information he based his expectations on.

Is it the collection of more money, taxes and fees, and resorting to considering every tax evader as a money launderer or a member of the Terrorism Law, as he previously threatened before the People’s Assembly?

Will there be more fees and taxes?

Or will the country move towards a breakthrough in facilitating the business and investment environment and issuing a modern investment law capable of attracting local, even immigrant, and foreign funds to the great, many, and varied opportunities that abound in Syria? Perhaps a law that provides the possibility of attractive capital rotation, employment opportunities, mobilization of production and markets, and export opportunities?

Will we be better at circumventing the sanctions, or will we finally improve our approach towards completing cooperation with friendly countries and arranging our relations with them in a way that avoids the power and ferocity of sanctions?

Will we witness monetary and financial policies that are able to stabilize the exchange rate, or even lower it?

Will we finally witness the suppression and severe restraint of smuggling that continues to put pressure on currency and industry and leads the country towards more deterioration in its economic situation?

What will the Minister of Finance do so that his year is financially better, so that taxation is not the only tool, and so that he can actually implement the directives of the president to improve the people’s livelihood in a way that he can implement the approved budget?

We really need an economic official who is able to read into the reality, the future, and the sanctions. This is the most basic skill that any government official should have, especially the Minister of Finance.

We hope that the Minister of Finance will tell us what awaits us, for we are tired of unscientific expectations and we are bored of being kept in the dark.