The Ministry of Agriculture is working with farmers to boost the production of wheat in Syria, and push the country out of the crisis that it currently finds itself in writes Al-Watan. 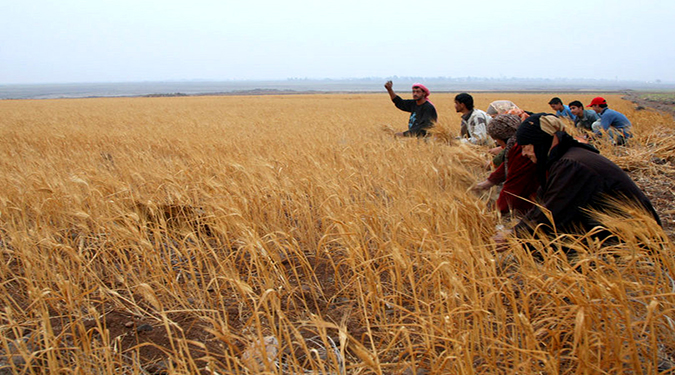 “Let’s bake in our homes and instead of waiting for the state, let’s help it.”

Minister of Agriculture Mohammed Hassan Qatana affirmed that the economy today is facing a great challenge and needs support and that it is relying on agriculture for that support.

Qatana said, during a meeting organised by the ministry to gauge the reality of the agricultural sector and what it needs to rise from the ashes, “If agriculture does not succeed this year, we are all losers as a ministry and people.”

Qatana said that the advancement of agriculture depends on everyone and that work must be done hand in hand to restore the agricultural sector, explaining that the economy needs support and we are facing an opportunity that is a step forward through which we could rise again, adding, “If we fail, we would need a greater effort to save the economy.”

Qatana said that calling the current year ‘The Year of Wheat’ holds a lot of significance, since, according to him, wheat can help make the country stronger, advancing its capabilities, and the largest quantity of wheat must be secured as wheat is a strategic crop.

Syria’s annual need for wheat today is 2 million tons, so the need for bread can be secured for the current population. Additionally, 360,000 tons of seeds are needed and about 800,000 tons for other produce are needed, including bulgur, pasta, semolina, freekeh, and others.

Qatana said that, at some point, there was a very large strategic stockpile, but during the war, the decline began until we reached a stage when we had to resort to importing wheat, which is considered a stressor on the Syrian economy. A lot of foreign currency exchange is involved in the process, which is difficult in light of international sanctions. Relying on producing wheat locally is considered a national weapon, especially since the Syrian economy is reeling. The economy must be saved, and everybody should work at developing agriculture and revert back to agricultural investment within a cooperative mindset to secure all production requirements.

The minister indicated that ‘The Year of Wheat’ means planting every inch in Syria, and instead of ensuring national food security, household food security must be secured, which is important and necessary to secure self-sufficiency. “Let’s bake in our homes and instead of waiting for the state, let’s help it,” he added.

He continued, saying, “We are faced with two options, either we do not plant and lose everything, or we grow crops and take part of the yield so that we can make phosphate fertilizer.

The minister stressed the need to secure the production requirements of seed, adding, “we have approximately 80,000 tons of seeds, 50,000 tons of which have been distributed to farmers, and all the diesel needed by the agricultural sector has been secured in cooperation with the concerned authorities.” He also spoke about the importance of setting a timetable for distribution in a manner that prioritizes agriculture over the industrial, domestic, and other sectors. It was agreed to secure agricultural equipment, such as tractors, after it was noticed that there was a shortage of about 37,000 tractors, according to the minister.

In turn, the head of the General Union of Peasants, Ahmad Ibrahim, said, “We, as the Union of Peasants, have always been warning and declaring that the previous agricultural policies were wrong and had negative repercussions, and we emphasized the need to secure production requirements.”

In a related context, the Director General of the Agricultural Cooperative Bank, Ibrahim Zaidan, indicated that the government confirmed that support is continuing till the end of the season and that there is no increase in prices for the whole year, stressing that the bank is ready to provide all loans and services related to the agricultural sector.