Residents of Zakia have complained that they were deceived about the nature of their contracts with the Russian military and what their job would be in Libya writes Sowt Al-Asima. 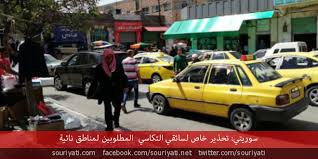 On Wednesday, a group of men from the town of Zakia in rural western Damascus cancelled the contracts they had made to fight in Libya alongside Haftar’s Russian-backed forces, just hours after they had been transported to an army gathering point in Homs city.

Exclusive sources told Sowt Al-Asima that the group of 15 men cancelled their fighting contracts with Russian forces and returned to their homes after holding a meeting with Russian commanders at the gathering center in Homs.

According to the sources, the men discovered that Aziz Shoudab, the official who had drawn up the contract, had deceived them, after they met with Russian forces, who explained to them that their mission was to prepare for transport to Libya, where they would be thrust into ongoing battles.

Shoudab recruited the men on the pretext that they would be protecting Russian military installations in Libya, and not directly taking part in battles, which led them to protest the mission and demand they be returned to their hometown, the sources said.

Members of the group reportedly communicated with their family members and explained the mission they would be taking on, expressing their desire to return home. Their families leveraged direct threats to recruitment officer Aziz Shoudab and his family, should the men not be allowed to go back home.

After communicating with Russian forces, Shoudab was able to return all of the men home to Zakia, and the Russians subsequently cancelled his recruitment mission, according to the sources.

The first group of men recruited from Zakia to fight in Libya alongside Hafter were transported on Tuesday by Shoudab, the commander of a local militia affiliated with Military Security. They were taken to a Russian center in Homs city, to convene with recruits from other Syrian governorates, where they would then be transported to Benghazi, Libya.

Shoudab, a former commander from the opposition group Ahrar al-Sham was tasked in April with recruiting men from the area, after an agreement between Russian commanders and Muhsen Shoudab, a prominent reconciliation figure in rural Damascus and a political front for his brother Aziz.

The agreement included recruiting 1,000 young men from Kiswah, Zakia, Muqeilibah and Deir Kheibah in rural western Damascus for a deployment contract of three months and monthly salaries of 1,000 dollars per fighter and 1,500 dollars per unit commander.

Shoudab organized the combat contracts for the first recruits willing to go to Libya on May 5, 2020, at the Military Security headquarters in Kiswah.

Russian forces approached the family members of detainees from south Damascus, offering to free their loved ones from Adra and Sednaya prisons in exchange for fighting alongside Khalifa Haftar’s forces in Libya, as well as removing their security files and letters of pursuit, and halting arrests of local residents willing to fight in Libya. Their contracts would be for three months only, with the possibility of renewal for those who are willing to do so, in exchange for 1,000 dollars per month for each fighter. They managed to recruit 50 men through these means from Yalda in south Damascus, and transport them to the Russian Hemeimeem Airbase last week for subsequent transfer to Libya after military training.

Russian forces managed to send a group of 25 recruits from East Ghouta’s Douma city to Benghazi via the Damascus International Airport in early February to fight alongside Haftar. Their contracts were for three months, and one month unpaid furlough, in exchange for a monthly salary of 800 dollars per recruit, in addition to receiving a “Friends of Russia” card at Hemeimeem Airbase that protects the cardholder from any security questioning or arrest.

Russia has also recruited former fighters from the Suqour al-Sahraa militia in central Syria to fight in Libya for a monthly salary of 1,000 dollars and exemption from mandatory military service and protection from pursuit by security forces.