Damascus has been hit by a number of explosions that have targeted individuals and reveal a contrary picture of the safe capital that the regime claims reports Alsouria Net. 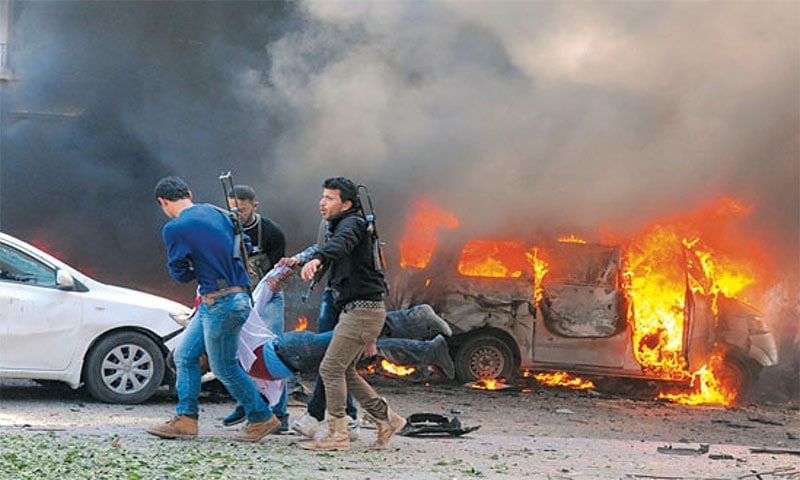 “Damascus is completely safe and hardened against terrorism and its sponsors.” With this official statement, issued by the Assad regime leadership on May 21, the Syrian capital and its countryside were declared safe after the removal of rebel groups and the Islamic State (ISIS) from the south of Damascus.

However, during the past three weeks, the return of a large numbers of blasts targeting civilians and military personnel using explosive devices in many parts of Damascus and its countryside has left citizens confused and questioning who is behind these attacks. They fear that they will continue, remembering previous bombings that killed dozens of civilians—the fiercest of which was the February 2015 bombing of the Mazraa neighborhood, which killed 60 people and wounded 260.

Damascus and its countryside witnessed eight explosions between Feb. 6 and Mar 1, 2020, all in the same style—an explosive device planted in the cars of targeted individuals.

The first blast occurred on Khaled Bin al-Waleed Street, resulting from an explosive device planted in a private Toyota pickup, wounding one person. Four days later, there was a bombing behind the al-Galaa Park in the Mazzeh area, which wounded one person. A bombing near the garages in the Bab Musalla area on Feb. 18, 2020, was the largest, wounding five civilians, one of whom was left in critical condition.

The fourth bombing struck Marjeh Square in Damascus on Feb. 20, 2020, and the Interior Ministry reported that an explosive device inside a pickup truck had wounded two people.

Less than a week later, on Feb. 25, 2020, Damascus witnessed the detonation of two car bombs. The first was in the vicinity of the Tishreen stadium in the al-Baramkeh area, killing one person and wounding another. The second was at the entrance to the Umayyad tunnel in the center of the capital, targeting a director at the Arab Advertising Organisation, Nabil Khaddour, and wounding him, according to SANA.

Just one day later, an explosive device went off in a car near the Baath Party branch in the Qatana area of Damascus countryside, targeting an unidentified Palestinian leader and wounding him.

The last of these bombings was on Mar 1, 2020. A pickup truck near the Jaramana municipality police station in Damascus countryside exploded, but caused no injuries.

Assad’s Interior Ministry offered no explanation for these explosions, except for statements by Information Minister Imad Abullah Sarah during a visit to Khaddour Hospital, saying that, “the aim of the bombings is to mar the victory achieved by the Syrian army and sour the joy of Syrians.” He said that, “the terrorist bombings are not only in Damascus, but in all Syrian provinces—and this is to be expected.”

Despite the Assad regime’s repeated accusations that “terrorists” are behind the bombings, the people targeted were not in high command positions. This may suggest that the aim may be an attempt by some parties to sow chaos and convey a message to the regime that they are capable of reaching the heart of the capital and detonate explosives at any time.

A defected Interior Ministry general, Mahmoud Ali, believes that the bombings are the settling of scores between leaders in the National Defense militia, which was forced by the Assad regime to support it in its fight against the rebel groups.

On the social media, some citizens speculated that the regime was creating the blasts itself to create justifications for security checkpoints to return to the streets of Damascus. General Ali thought this was unlikely, because it was not in the interests of the regime for these checkpoints to return. They wish to deliver a message that the capital is safe and give reassurance to its supporters, as well as a message abroad that Syria has removed the barriers and is safe again.