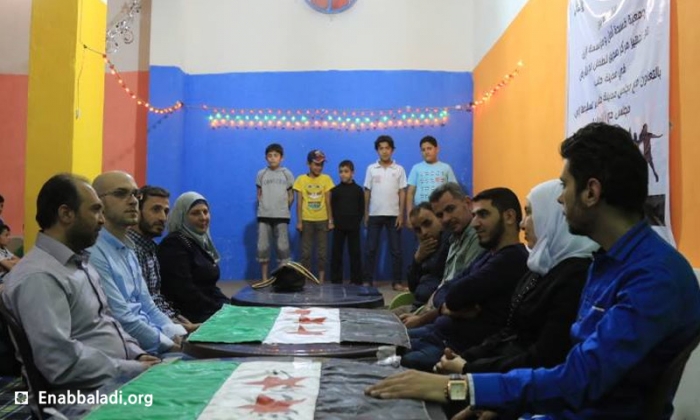 Civil society groups in Aleppo city opened the first underground recreational center for children in the “Zeitounat” district, which will be followed by the opening of four other centers in the next few days.

In cooperation with the Space of Hope group, and overseen by the educational office in the Aleppo civilian council, the Baraa (Innocence) Foundation opened the underground center on Tuesday, May 10.

The preliminary project includes five centers in the al-Sakhour, Salaheddin, al-Amariyeh, and al-Sukari districts, in addition to al-Zaitounat, with each center encompassing three sections: a stage, library and reading room, in addition to the play area. The centers are also equipped with a projector and laptops to play cartoons and children’s films.

The head of the city council, Bareeteh Haji Hassan, attended the opening along with the head of the education office, Ayman Hashem, according to activist Sallem al-Atrush, member of the administrative council of the Baraa Foundation, who spoke to Enab Baladi.

The education office participated in the project at the request of the Baraa and Space of Hope groups, Atrush said, adding: “The target group is children, especially schoolchildren. We want the education office to be a partner in this project.”

The member added: “We handed over the first center to the education office and withdrew, and will deliver the remaining centers later and become the supervising authority for the project and follow up to secure support from other groups and ensure its continuation.”

The project’s primary aim is to secure play spaces for children after schoolyards were closed permanently, as well as developing children’s skills through the practice of various activities.

“Schoolyards were five times the size of the schools themselves, and as a result of the bombardment children were forbidden to use them. There are no longer buildings for schools in any real sense of the word.” Atrush said: “For children, not playing in large spaces can create violence, repression and aggressiveness, especially given that we live under wartime conditions which prevent children from experiencing normal childhoods.”

The idea began when the Syrian regime bombed the Salaheddin district in November 2015, killing five children who were playing in the street, according to the activist, who added: “There was an urgent need to protect children, at the same time as the school was being transformed into a shelter, and so we thought about building play centers underground.”

He added: “Many children lost their limbs or were killed as a result of playing in the street or in open areas, which pushed us to think of how to move the playgrounds into underground basements.”

“The Aleppan child has been sentenced not to see the sky or sun or hear the sound of birds, as the city has begun to move its life underground.”

Atrush concluded, saying: “We do what we can to help children, and compensate the child for a childhood stolen by war.”