The recent peace agreement between the UAE and Israel was barely acknowledged by Syria, but not for lack of interest, but rather due to the complicated relationship between the two countries writes Annahar. 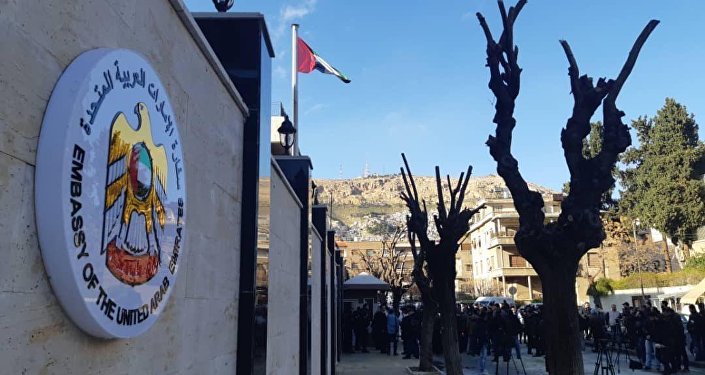 Relations between the UAE and the Syrian regime are peculiar in the sense that they are different to the UAE’s relations with other Arab countries that experienced the Arab Spring. In Syria, there is an amalgamation of the Iranian threat, the Muslim Brotherhood, and Turkey. Safeguarding the secularism of the Syrian state and its institutions was an important priority for the UAE, especially between 2011 and 2014.

With the beginning of the revolution in Syria, the Emirati Minister of Foreign Affairs, Sheikh Abdullah bin Khalifa, visited Damascus, where he presented to President Bashar al-Assad an Emirati proposal that had been agreed upon with the US, Europe, and Saudi Arabia that included a pledge to support the regime economically with an amount of 15 billion dollars. The proposal added that the Gulf states will use all their influence in the West to reach a peace agreement that would return the Golan to Syria, in exchange for economic reforms, halting the military solution, and minimizing the relationship with Iran.

The UAE joined its Gulf Cooperation Council (GCC) counterparts in condemning the Syrian regime’s actions against the protesters in the late summer of 2011. Ultimately, the UAE, along with the other five member states of the GCC, closed their embassies in Damascus in March 2012. They did announce, on several occasions over the subsequent years, that they supported the “aspirations of the Syrian people to restore security and stability in the country.” They also participated in international conferences in support of the Syrian revolution.

However, the fear that the regime would fall into the hands of Islamists and the possible expansion of the Iranian influence in Syria prompted the UAE to maintain communication with the regime, thus not completely severing its diplomatic relations with Damascus. The Syrian embassy continued to be operational in Abu Dhabi, and the UAE opened its doors to a number of Assad’s close relatives, including his mother, Anisa al-Assad, and his sister, Bushra.

Additionally, a number of pro-regime businesspeople, who were subjected to international sanctions, continued their work through local companies that enjoyed a certain degree of freedom in the UAE, including Samer Foz and Bashar al-Assad’s cousin, Rami Makhlouf. On the other hand, many Emirati businesspeople maintained their relations with Damascus for a long time after the revolution in Syria. Some of them established new companies in Syria and/or opened branches of their existing companies in the UAE. Among them is Abduljalil al-Blouki, who established a development and investment company in Syria in 2013.

In 2015, Russia intervened in Syria, and a year later, Assad began sending messages to the UAE, Egypt and Italy, and through them to the West, stating, “If you want to get rid of Iranian influence in Syria and limit the Turkish role, you must provide me with support, for I am the one who can make that happen.” Also, he demanded that those countries help him return to the Arab League and support the Syrian economy. Although many countries appeared positive about the idea, Assad’s failure to make any positive political step to resolve the Syrian crisis and his repeated use of chemical weapons prevented these countries from making any real public effort to normalize relations with the regime, instead considering Assad’s attempts as old, useless tricks. However, this did not prevent the continuation of security communication between the Syrian apparatus and those of the other countries.

The sharp differences between the UAE, on the one hand, and Turkey and Iran, on the other, prompted the UAE to reopen its embassy in Damascus in 2019, in conjunction with Sheikh Abdullah bin Zayed’s call on Iran and Turkey to end what he called their “colonial” actions in Syria and their attempts to jeopardize the sovereignty of the Syrian state. Back then, the regime tried to take advantage of the Emirati move to support its legitimacy in the eyes of Arab countries and offered nothing in return.

Damascus did not react to the signing of the Emirati-Israeli peace agreement on Sept. 15, 2020. It seems that the UAE wanted to reintroduce the idea presented to Assad at the beginning of the revolution, which was to sponsor a Syrian-Israeli peace agreement, offer economic support, and implement political reforms. Meanwhile, Mahdi Dakhlallah, a member of the leadership of the ruling Baath Party in Syria, demanded, in an interview with a pro-regime news channel, to stop the resistance and impedance, all the while promoting normalization and saying that peace with Israel is upon us.

Media outlets quoted sources close to Damascus that Gen. Husam Louka, head of the General Security Directorate in Syria, who is affiliated with the Russian forces, visited the Emirati capital Abu Dhabi, accompanied by four intelligence officers, a week after each of the UAE and Bahrain signed a peace agreement with Israel in Washington to continue discussing the UAE proposal. However, the Syrian regime’s delegation demanded the unconditional withdrawal of the US from Syria, which Deputy Syrian Foreign Minister Faisal Mikdad stressed, resulting in the suspension of talks and the regime’s issuing of a statement against the peace agreement.