The recent Warsaw summit aimed to create a united front against Iran, but failed to create a consensus of ideas or opinions writes Al-Watan. 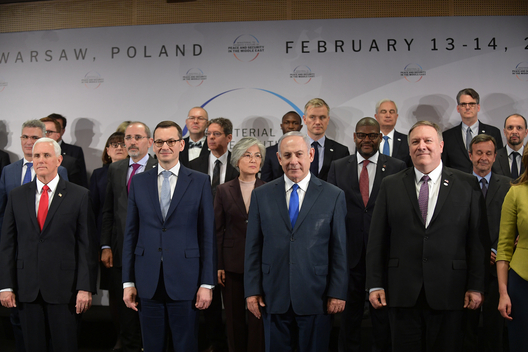 The Warsaw summit called by the United States, with representatives of 60 countries in attendance, including foreign ministers from ten Arab countries and the prime minister of the Zionist entity, Benjamin Netanyahu, failed to achieve its primary aim, which was forming a regional and international front against Iran. Instead, it turned into a normal conference with the aim of recognizing the Israeli presence as an open fait accompli. American Vice President Mike Pence spoke of the Saudis and Emiratis sharing bread with Israel, which was clear evidence of the conference’s nature.

The conference came within the context of passing the American “deal of the century,” with the participation of its godfather Jared Kushner—the son-in-law and adviser to President Trump. The deal aims to obliterate the Palestinian cause and to legitimize the Zionist entity and to integrate it into the region by forming an Arab-Zionist-American alliance to confront an imaginary enemy, represented by Iran.

The head of the Iranian National Security Council, Ali Shamkhani, said that Washington’s sponsoring of an anti-Iran conference meant the failure of the most severe sanctions in history, and indicated inability and despair.

The American Secretary of State, in closing the conference, said that a meeting of Israeli and Arab officials in the same room the night before had comprised a historic day. In his speech, Vice President Pence criticized the position of Washington’s European allies on the Iranian nuclear deal, saying that the mechanism that the European Union had set up to ease trade with Iran was an effort to break American sanctions on the Iranian regime.

The Palestinian Authority refused to attend the conference and said that the central factor in regional instability was the Israeli occupation, and that there would be no security or stability before the occupation ended.

Russia also refused to attend the conference and considered it a hostile step against Iran rather than being for the sake of discussing solutions to Middle East issues. Its ambassador to the United Nations said that the Warsaw conference would harm Middle East security and that the attempts to form certain political-military alliances in the region were not constructive.

Federica Mogherini, the European Union’s High Representative for Foreign Affairs and Security, justified her lack of attendance with compliance to prior commitments. Even its host Poland said that it was still complying with the EU position supporting the nuclear deal with Iran.

France and Germany as well as some other European countries were able to establish a system for financial cooperation with Iran in order to avoid American sanctions. This measure also derailed the American and Israeli plan to isolate Iran and blockade it economically.

Analysts believe that the United States aimed to achieve a number of gains from the conference, first of all to pressure Iran and to blockade it, as well as to include Israel as a major player on the field in combating Iranian influence. The United States failed to mobilize against Iran. All American policies over the past 40 years, including economic war, psychological war, proxy war, and the war in Syria have failed. Therefore America has resorted to this conference, which was like a circus, in order to compensate for its failure.

The Warsaw conference was stillborn. More than 20 major and important countries declined to attend the conference. The remaining countries that participated had a very low level of representation. Therefore the results were not as the United States desired, faced with the solidity of the Iranian political and military position. The conference failed to advance the idea of the “Arab NATO” to confront Iran, which was an American idea put forward in 2011 and renewed in 2015, to form an Arab security alliance to “repel Iran.”

The Warsaw conference, engineered by America, in its current form is a circumvention of resolutions with international legitimacy—indeed it is a declaration of war upon them. It is a reward to the occupation state for its occupation of Palestinian and Arab land, and it is one form of the political confusion of the Trump administration. In the context of the American strategy to liquidate the Palestinian cause, it is a despairing attempt to portray Iran as an enemy of the Arabs, and to show Israel as a peace-loving neighbor, rather than a racist state planted in the heart of the Arab nation to strike and to prevent the establishment of any Arab renaissance, occupying the land of others and turning its back on international law and the international community.

The American-Israeli conference in Warsaw failed, and it is a black mark for the Arab governments who participated. Its results will be no better than those of the Geneva Peace conference held in 1973, without the participation of Palestinians.