The Western strikes on Syria have shown Russia, Iran and the regime there is no true victory ahead of them, Ammar Dioub writes 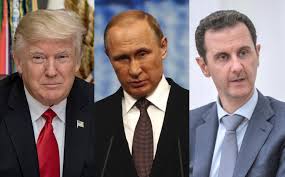 The Russians finished securing Damascus from any threat by expelling the last armed faction in the Damascus Ghouta on April 13, 2018. But Russia wanted to send a message to America that the previous agreement regarding the chemical weapons in 2013 had ended, and allowed the regime to use them in Douma a few days before this specified date.

This message means that Russia is in control of Syrian affairs, and that the Americans must leave Syria for good.

Of course, this did not come to pass. This was a Russian declaration of victory in Syria, and perhaps a Russian response to all the American and Western policies regarding the strengthening of sanctions on Russia and the expulsion of diplomats, and so the West had to take a direct position.

All the discussions of Western countries in the Security Council and the United Nations did not deter Russia, and it deployed continuous lies in denying the chemical strike in Douma, even accusing Britain of being behind fabricating the chemicals there.

Russia did not leave America and Britain any other option. Hence, the precisely defined strikes at dawn on April 14, 2018, directed at facilities and bases specifically connected to chemical weapons.

At the same time, the American message was clear that the Russia does not have a right to control Syria’s fate, and the aim of the strikes was to end this monopoly, and that resolving the differences between the countries occupying Syria will not occur in Astana or Sochi, but in Geneva.

U.S. President Donald Trump’s speech about the beginning of the attack included a message for both Russia and Iran that the strikes would not hit their bases in Syria, and so there are things they must do to ensure their interests in Syria.

This clarification confirms the need to curb Iran in Syria and that Russia should not imagine it can control Syria’s fate alone.

What I have said here is connected to the American strategy against Iran, which is based on scaling it back everywhere, and not just in Syria – there is also Iraq, Yemen and Lebanon.

These strikes serve as a clear political message to the West that the major decline of the opposition forces and securing of the capital will not be a prelude to America leaving Raqqa and eastern Syria, nor from Idleb, as the Iranians repeat.

The Turkish support for the strikes contributes to a reconsideration of the policy, and not to celebrations over the Ghouta expulsion.

Neither Russia nor Iran repulsed this strike, and it also did not expand America, Britain or France’s influence on the ground.

The areas previously specified as areas of influence remained as they were. If the strikes are limited to military targets ending chemical weapons and preventing them from being used again, it is an international issue pertaining to global peace. America, Britain and France stressed that they will continue strikes in the event that the Syrian regime uses them again. The political aim, as we have said, is returning to the Geneva track and to resolve the crisis.

The Russians and Iranians have stuck with the regime for long years and have halted the Geneva track in favor of Astana and Sochi. Now there will be a return to the Geneva track.

The political solution will not necessarily be in accordance with the provisions of Geneva 1, but it will be a track that ends all delusions of Russian, Iranian and regime victory, and all that they have done to destroy Aleppo and the Damascus Ghouta, and many other areas will not permit unilateral control by Russia and its allies.

America and its allies are no longer content to merely fight militants of the Islamic State group (ISIS), and they will also not overthrow the regime militarily, as shown by the results of the limited strike and any subsequent strike, which has been clear since 2011.

However, the statements of U.S. Defense Secretary James Mattis and the many other statements about returning to Geneva contain a warning for Russia that it is no longer allowed to play freely with the Syrian and global situations.

The meager Russian statements that the American rockets would not pass over Hmeimeem sparked derision – therefore the strikes were actually directed at the Russian President Vladimir Putin, and to all those who imagine that Russia will reemerge as it had been under the Soviet Union and who are discontented with America and the international system.

Putin will, through these strikes, return to defining himself as leader of a marginal country in the global system, such as Italy, for instance. His imperialism was not authentic, and the most important element was military power, which has limited ability to influence the world’s reformulation.

When America and the international system want to carry out a war and change regimes and redeploy, they are the true rulers of the world, even in Russia’s own environs.

Chemical weapons have finally been neutralized, as we believe. However, the transition to Geneva may not be achieved if Russia does not agree to the formulas under discussion, as Trump tweets that he will bomb anything related to chemical weapons in Syria.

However, the stories of Russia and its allies related to regaining Raqqa have certainly ended, and therefore Trump’s statements were just blackmailing Saudi Arabia, and so Russia and America are staying in Syria. The real thing now is to draw lines of influence in a fixed manner and the strike strengthened this.

But is it enough for countries to draw lines of influence or must they also move on to plunder and draw up a political system to serve their interests?

Here the issue currently on the table between America, Russia and the countries mediating between them is to search for a regime that serves their contradicting interests, in order to complete the plunder and the so-called reconstruction of the areas to benefit the interests of this plunder.

The successive statements about rebuilding are not consistent with the Astana or the Sochi path, but only Geneva or a new path, taking into account the results of the latest strike. America will not leave Syria to Russia again, and there must be formulas ending the crises in Syria, Iraq, Yemen and Lebanon.

If all analyses about the global imperial redeployment in our region are not wrong, this does not mean that there will not be new maps – and Russia will agree to this.

This requires Israel to be neutralized within its borders on one hand and to be strengthened on the other, and for both Iran and Turkey to be contained within their borders to go back to being “local” countries allowed only to maintain their internal borders. For Iran specifically this means ending all its tumult in Arab countries and ending its control over four Arab capitals.

The American, French and British strikes are a new beginning for cooperation with Russia and for curbing it at the same moment, drawing up policies for regional countries and perhaps for a return to the Geneva track, including constituting a new Syrian regime, completely subject to the interests of Russia and America specifically.