Major General Rafiq Shahadah has been a prominent figure in Syria for decades and has been linked to numerous crimes and corruption. 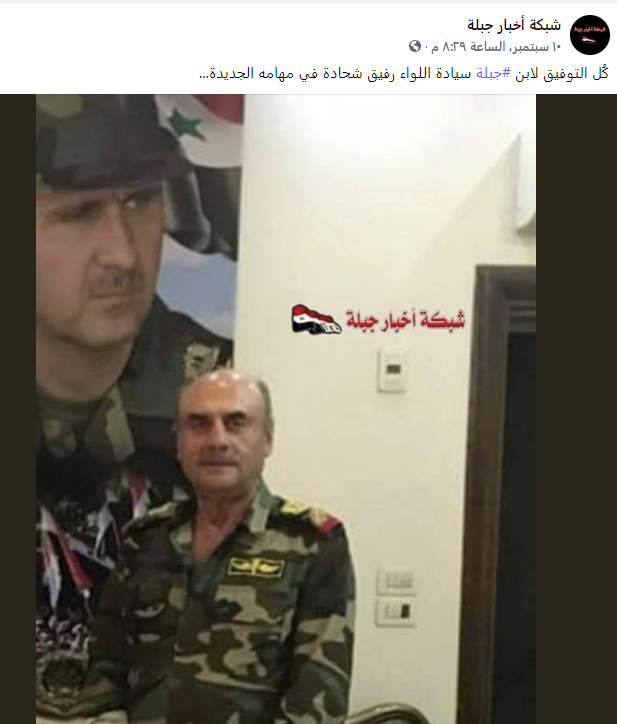 A new Office Manager to President Assad has been appointed recently.

Major General Rafiq Shahadah is an old guard officer, and has been one of the most prominent of their number in Syria’s new phase. He commanded Hafez al-Assad’s guard brigade at the rank of brigadier general until 2000, when he was transferred to Political Security, where he headed the branch in the al-Maysat area of Damascus. He then was appointed head of the Military Security branch in Tartous and Head of Branch 293, concerned with officers affairs under the authority of the Military Intelligence Directorate based in Damascus.

When the Syrian revolution erupted out in 2011, Rafiq Shahadah was working as head of the Security and Military Committee in Homs, and served as deputy head of the Military Intelligence Directorate, headed by Major General Ali Mamlouk.

Major General Rafiq Shahadah is considered to be directly responsible for the Clock Square massacre in Homs, which killed and wounded hundreds of the city’s residents. He was also responsible for the violations committed by security forces in Homs province, especially in Baba Amr, Talbeesa, and al-Rastan.

As a result of the “Crisis Cell” bombing in 2012, Major General Rafiq Shahadah was appointed as head of the Military Intelligence Directorate following Major General Ali Mamlouk, who became head of the National Security Bureau.

While he headed this agency —one of the strongest and most numerous of the regime’s security agencies — Shahada and his men carried out various violations and criminal acts against Syrians. He has been implicated in the killing, arrest and disappearance of tens of thousands of Syrians, and his forces were accused of raping women in the Military Intelligence Directorate’s basements, and of the deaths and arrest of hundreds of officers and soldiers on the charge of opposing the regime or on suspicion of defection.

In March 2015,  he was accused of killing Major General Rustum Ghazaleh, head of the Political Security Directorate at that time, after he was beaten by Shahadah’s men after a dispute related to corruption. Consequently, he was released of his duties and put at the disposal of the Commander-in-Chief of the Army and Armed Forces, Bashar al-Assad.

In July 2016, The New York Times published a report about the details of the suit brought by the family of the journalist Marie Colvin (Case 1:16-cv-01423) before a federal court in the American capital, Washington, D.C., against the Syrian Arab Republic on Jul. 7, 2016. The journalist’s relatives accused ten Syrian officials, most prominently Maher al-Assad, Ali Mamlouk, and Rafiq al-Shahadah of killing Colvin in the Baba Amr district on Jan. 22, 2012, as well as the French photographer Rémi Ochlik, when regime forces bombarded one of the buildings which the correspondents were using as a media center.

A man of controversy

Rafiq Shahadah is considered one of the most controversial officers in the regime’s ranks, as he has been deeply involved in corruption and has exploited his position to serve his personal interests. His son, Mudar, was appointed to the Syrian Foreign Ministry and was made a diplomat working in the Syrian embassy in London. When this embassy was later closed, he was transferred to the embassy in Ukraine, and it is worth noting that his education did not exceed high school. He has two brothers, the journalist Sharif Shahadah and another serving as an officer in the Syrian army.

General Shahadah has been subject to US Treasury Department sanctions since 2017, along with 17 officials in the Syrian regime and six other entities under regime authority for their role in carrying out the regime’s monstrous crimes against the Syrian people.