Brig. Gen. Talal Qassem was gunned down by unknown assailants in Daraa, marking the most recent assassination, and a continuation of security chaos reports Alsouria Net. 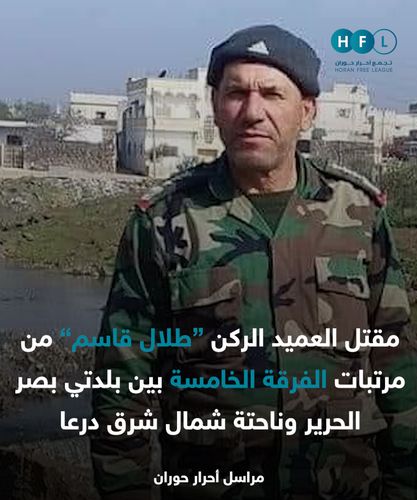 The same source stated that gunmen who were riding a motorcycle in the towns of Busra al-Harir and Nahata, northeast of Daraa, shot Qassem and fled.

Pro-regime pages mourned Qassem, known as Abu Tariq, who fought in the ranks of the Fifth Division and hailed from the village of Harisoun in the countryside of Baniyas, Tartous governorate.

Activists said that another attack took place in the town of Nahj, western countryside of Daraa, targeting Assad forces, which led to the killing of two members belonging to the Fourth and Fifth Divisions, amid a precarious security situation.

Daraa has been witnessing similar assassinations since August 2018, which is when opposition fighters signed a settlement agreement with the regime. Back then, the assassinations were targeted towards those recruited through settlement deals. Some Assad soldiers were also assassinated.

No party has claimed responsibility for the assassinations or the targeting of Russian and Assad forces. All of the assassinations were recorded as “unknown culprit”, while the regime has been passive towards the security chaos that the governorate has been witnessing for months now.

Although the settlement agreement for Daraa, which was sponsored by Moscow, did put an end to the military operations between Assad’s forces and the opposition factions and stipulated that the factions hand over their heavy weaponry, it kept a large number of faction operatives in their regions, unlike what happened in other areas that the regime regained control of.