Regime officers continue to die and be killed, with frequently very few details about the circumstances revealed by the regime reports Shaam News Network. 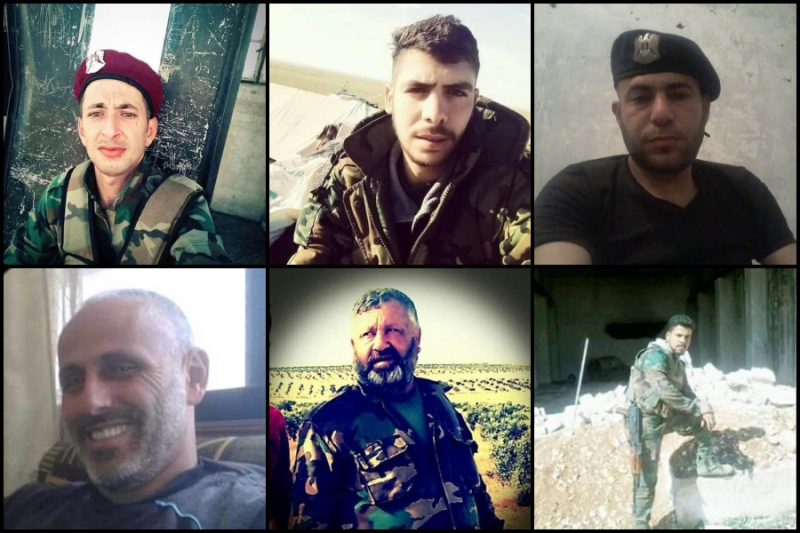 Over the past few days, pro-regime pages mourned a number of officers and Shabiha who were killed in differing citcumstances, most of which are mysterious, and which has become frequent in what appears to be liquidation operations taking place within the regime’s intelligence branches and its military parts. It has been happening in different areas of the country, with the killing of officers now being announced without disclosing further information about the incident. Most incidents were recorded as due to health reasons, according to the same sources.

The Shaam News Network announced the death of an official in the Military Security branch in Aleppo, called Maher Ali al-Taqash. Pages affiliated with the intelligence praised his role as one of the most prominent figures who participated in what they said were security operations assigned to him by the anti-terrorism department. The cause of death was not disclosed.

Two officers who hold the military rank of first lieutenant, Muhammad Hussein al-Hassan, from the Quneitra countryside, and Tamer Haj Ibrahim passed away under mysterious circumstances, while pro-regime pages circulated photos of them during their service with the regime army.

Pro-regime pages mourned the passing of a member who belonged to the committees led by the National Defense Forces (NDF). His name is Nemer Hassan Ghanem, who hails from the city of Baniyas, after what they said was a painful incident, without revealing other details about the incident.

An officer with the rank of lieutenant, named Salim Seitan Nasr, was killed at the age of 34. Pro-regime sources claimed that he died as a result of a severe heart attack while performing what they said was “national service”, at the Mezzeh Military Airport in Damascus. He is originally from the town of Orman in the countryside of Suweida.

The regime’s pages acknowledged the death of an officer with the rank of first lieutenant by the name of Maher Nabil Jarewa, who hailed from the countryside of Jableh. He was killed by the revolutionary factions on one of the fronts in the Idleb countryside, according to what has been reported by the pages that deliberately conceals the extent of the losses they have suffered, and selectively disclose information of officers, as per usual.

Local observatories in the liberated north indicated that a group of regime-affiliated militias had died in a minefield along the Tanjara axis in the al-Ghab plain area in the western Hama countryside, during a failed infiltration attempt, which resulted in a number of casualties.

Moreover, it has become customary for the regime’s pages not to disclose deaths in what they label as “reconciliations.” A large number of people have passed without being mentioned by the regime’s pages, at a time when pictures of the dead from pro-regime villages are published. While all numbers are approximations, the Assad regime continues to neglect to disclose them.

The regime’s militias has been suffering heavy losses amidst the escalating assassination operations, which intensify with every attempt made on the battlefronts by the rebel factions in the liberated north.