The transcript of Syrian President Assad's speech after swearing in the new government, as reported by state news agency SANA 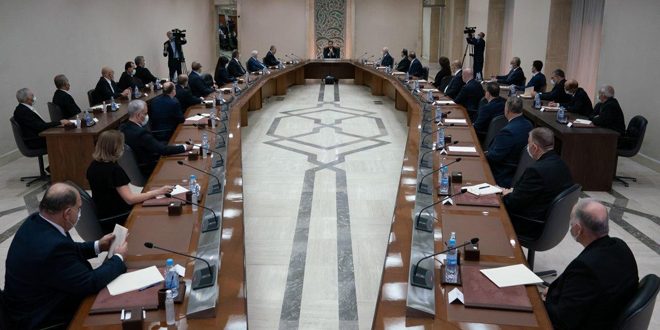 Members of the new Cabinet, chaired by Eng. Hussein Arnous, sworn in before President Bashar al-Assad on Thursday. After the ceremony, the President chaired a meeting of the new cabinet. He addressed the current challenges before his government.

Below are Assad’s remarks as published by the official news agency SANA:

President al-Assad, chairing the meeting after the swearing in ceremony, welcomed the new government team, saying “the new government means new members with new ideas and old members with renewed ideas which means reformulation with more developed and more active ways through reviewing visions, strategies and developing mechanisms of execution.

President Al-Assad said that the first important point in the priorities is the project of the administrative reform, announced for it three years ago, and it is obviously that the right government or institution comes in the good administration.

“In the same context, if good laws were issued and if there were successful  policies put by the government , but there was no good administration  to manage these policies and apply those laws, thus, there is no value for  the policies and laws,” the President said.

He added that the same thing is applied for human resources… we often talk a lot about the existence of Human resources and say that competencies are there and are available , so why we do not bring these competencies , this is good speech, but it is meaningless without a program.

The President clarified that there is an important point for the project of administrative reform which is preventing intersection between institutions and laws inside the institutions.

As for combating corruption, President al-Assad said that the Syrian institutions have proven during the past period an anti-corruption policy which means this is not mere slogans, this means that what has been achieved in the fight against corruption is very important, but it does not mean that it is enough and does not mean that we have gone through long stages because corruption is there and “I don’t want my word to be understood as that the majority of society is corrupt because this illogical , always the majority is good but the few corrupts are the ones that are overwhelming , it has the power and the ability to affect…  and what we have started in the State needs doubled efforts in the future more than what have been exerted in the past.”

On the contrary, the largest portion of corruption can be prosecuted through the laws, when we exert efforts, he added.

President al- Assad went on to say that in this framework, the most important point for the laws is exceptions, so what is required from every minister is to return to the laws of his/her ministry, of course, in Syria, we have hundreds or thousands of laws, but there are basic laws that directly affect citizens and we must start with them and put regulations and criterion for these exceptions.

President Al-Assad said: “If the judiciary is the basis for fighting corruption, then the beginning is from you, from the institutions… fighting corruption does not only mean that the official will be honest, but rather he/ she has to be honest and combat corruption. In the end, the fight against corruption must be comprehensive and, of course, through media. The role of media is very important, especially in investigative issues. I am here talking about the traditional media and the professional electronic media.

As for the issue of programs and work mechanisms, President Al-Assad said “I proposed during my speech to members of the People’s Assembly recently the subject of the programs. We need a mechanism to achieve coordination between the different institutions and mechanisms. As long as we are talking about priorities, these priorities mean that we need specific sectors to achieve rapid progress and grate results at some point in time.”

So the program gathers all these parties in one place in order to provide this service and make a big leap forward, one of the examples is the ” Homeland Wounded “project.

It has become one project that works in a single-mechanism-of-use, and recently the project takes the developmental trend and this trend is broad. There are funding bodies, there are multiple bodies related to microfinance. Now we are thinking about how to join these bodies to provide loans to the wounded.

Those wounded are doing projects, some or most of them are agricultural.

Regarding production, the President said that the most important way to confront the blockade is to support the production in general, but it goes without saying that agriculture comes first in Syria in this domain.

“The infrastructure is available and the environment is agricultural which means that we can achieve a lot of job opportunities in a very short time and at the same time we can achieve the food security, and this means securing the most important factor of the resilience,” President al-Assad said.

He added “But what is required in this regard is to give priority to the agriculture sector, and the ministries concerned have to cooperate for pushing this sector forward as soon as possible, so it’s necessary in this domain to provide support to all industries that support the agriculture.

Regarding the production in general, we have to focus on supporting every industry or service that increases the additional value to the national product, thus it consolidates self –reliance, the President affirmed.

President al-Assad considered that the other important sector is IT sector as this sector doesn’t need a lot of imported raw material, as the basic raw material here is the mind, the youth and creative mind. He added that the development and creativity doors in this sector are open without any limits and they won’t be affected by the blockade.

President al-Assad pointed out that the electronic payment is another important point, saying that if we think of headlines such as transparency, tax evasion, corruption, the strength of the Syrian pound and other topics, they all put us in front of the electronic pay that contribute to strengthening the Syrian pound through transferring this pound from the random channel to the organized one inside the banks.

As for the Syrian media, President al-Assad said that the Syrian media has made good steps in light of difficult conditions, adding “the media should continue hunting the places of defect without any hesitation.”

And the duty of officials is to respond, whether through an interview or through a statement.

“It is necessary to expand the circle of dialogue whether with citizens, specialists or with officials… this raises the level of dialogue and knowledge, as well this raises our capability in the Syrian society to find solutions to the problems with a broadened vision instead of a narrow one.” President al-Assad said.

The President added that the government has to support media to take its active role and make it a success instead of obstructions.

“When we use the official media to convey the true and confidential information, thus, we make media a confidential reference of information and by this way, we cut the way against the chaos of internet,” President al-Assad said.

The President considered that the basis of the success in work for any official is the faith, saying “don’t’ be afraid of error because the mistake is part of the human nature… and we all know that those who work make mistakes and those who don’t work, don’t make mistakes… our skill is in our ability to see the mistake and later our ability is to correct it.”