A joint statement by rights groups says 15th of March will mark the second anniversary of the start of the Syrian revolution which has seen millions of people in Syria displaced, both inside and outside the country. 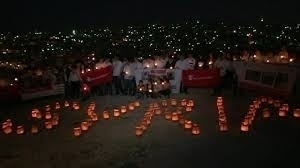 The 15th of March will mark the second anniversary of the start of the Syrian revolution which has seen millions of people in Syria displaced, both inside and outside the country.

During these two years, according to the United Nations, more than 70,000 persons were killed while tens of thousands of others have been detained or disappeared.

Thousands of Syrians have been submitted to torture and ill-treatments, sexual violence and looting.

“A White Wave for Syria”

The idea is simple: to ask people all over the world to support the Syrian people, at the same local hour, from 7 to 7.30 pm, by holding up a piece of white fabric or white paper with the word STOP written on it.

In this way, right across the world, from one time zone to the next, a huge white “ola” of protest will unfurl, to be broadcast throughout the day by the media.

To ensure excellent visibility, meeting points in front of, or close to, city halls will be announced in advance. Other assembly points will be left to individual initiatives in the workplace or leisure areas.

On that evening, everyone can post his or her photo, holding the word STOP, on the site:    http://www.vagueblanchepourlasyrie.org, thus creating a huge demonstration on the internet and social networks, in particular on the Facebook page dedicated to the event.

Everyone, everywhere, can be part of this mighty wave.    .

Over 500 personalities already took part in the “White Wave” organized on 17 April last (anniversary of Syria’s independence), when the movement was launched at the Trocadéro in Paris, and in several other French cities. Thousands of photos were posted on the site.

Today the movement must be taken up in every corner of the globe to strengthen the chain of NGOs  defending human rights, and to reach a maximum number of city halls, twinned cities, the medical world, the business community, the world of broadcasting and entertainment, the social networks and international celebrities.

We are appealing to individual initiative, civil society, and the creative talents of all to raise white flags worldwide, in demonstrations large and small, as an act of solidarity for the respect of the rights and dignity of the Syrian people, free of any political, state or partisan influence.