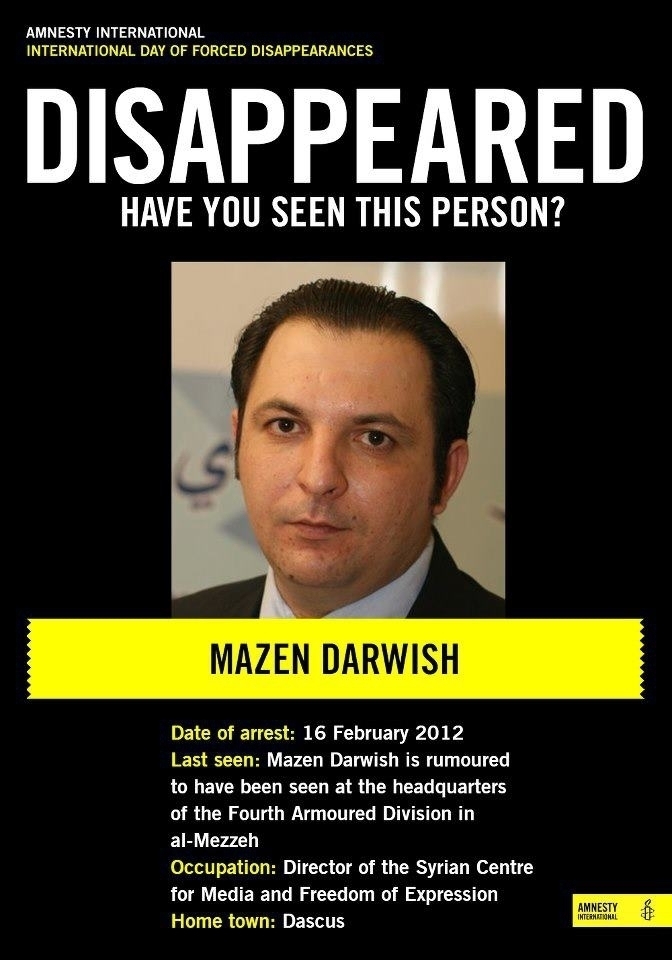 (New York, May 17, 2013) – The international community should urge the Syrian authorities to immediately and unconditionally release and drop all charges against a freedom of expression activist and two of his colleagues, 19 regional and international human rights organizations said today. Mazen Darwish and two of his colleagues from the Syrian Centre for Media and Freedom of Expression (SCM), Hussein Gharir and Hani Zaitani, are facing trial on terrorism charges for their peaceful activism, the groups said.

The three activists along with two of their other colleagues, Mansour Omari and Abdel Rahman Hamada, who were conditionally released on February 6, 2013, are scheduled to appear before the Anti-Terrorism Court in Damascus on May 19. During the trial, the judge will decide whether to pursue the charges brought against them by the Syrian Government’s Air Force Intelligence.

The Syrian justice minister recently told an international delegation that he would free 72 activists, including the three detained SCM members. Other countries, including allies of the Syrian government, should press the government to drop the charges and free them, the human rights organizations said.

Syria’s Air Force Intelligence detained the three men over a year ago, holding them in incommunicado detention for several months, on charges related to SCM´s work to promote and protect human rights in Syria. Air Force Intelligence officials subjected them to torture and other ill-treatment in detention according to former detainees who had been held with the men. The organizations said the charges violate freedom of expression by being solely based on the three men’s peaceful activism.

The organizations expressed serious concern for the physical and psychological well-being of the three activists, given the treatment they have apparently been subjected to in detention and the length of their arbitrary imprisonment.

The February 27 indictment against all five staff members accuses them of “publicizing terrorist acts” under article 8 of the Anti-Terrorism Law, enacted by President Bashar al-Assad in 2012. If convicted the men may be imprisoned for up to 15 years.

The indictment states that these charges were brought against Darwish as the head of the SCM and the four other men for their activities as SCM staff members, including monitoring online news by the Syrian opposition, publishing studies on the human rights and media situation in Syria, documenting names of the detained, disappeared, wanted and killed within the context of the Syrian conflict, and receiving funding from Western organizations. The indictment further states that an investigative judge in Damascus considered these actions part of an attempt to “stir the internal situation in Syria and so provoke international organizations to condemn Syria in international forums.”

The trial of the activists illustrates the government’s repression against critical voices in Syria and fits in a wider pattern of systematic censorship and repression against professional journalists, media workers, citizen journalists (including bloggers), and media activists who defend freedom of expression in Syria, the groups said. An attorney working on behalf of political detainees in Damascus told the organizations that to his knowledge at least 35,000 political detainees were being tried before the terrorism court. He believed that the terrorism court was set up specifically to target the opposition in Syria.

The Syrian government should not use its overbroad terrorism law to punish peaceful activists for their legitimate work, the organizations said. Further, their trial should not be held in the Anti-Terrorism Court, which does not afford defendants basic due process rights according to international fair trial standards.

This court is responsible for prosecutions under the Anti-Terrorism Law, which defines an act of terrorism as “every act that aims at creating a state of panic among the people, destabilizing public security and damaging the basic infrastructure of the country by using weapons, ammunition, explosives, flammable materials, toxic products, epidemiological or bacteriological factors or any method fulfilling the same purposes.”

The law also stipulates that promoting “terrorism,” including by distributing literature, or other

information, is punishable by imprisonment with hard labor. Financing terrorism includes supplying, directly or indirectly, money, weapons, ammunition, explosives, means of communication, information, or “other things” to be used in the implementation of a terrorist act.

Although the Syrian authorities technically lifted a state of emergency law on April 21, 2011, they enacted Legislative Decree 55 on the same day. The decree limits the time that a person may be lawfully held in detention without judicial review to 60 days for certain crimes, including terrorism offenses. A former detainee told Human Rights Watch that high-ranking officers explained to him while he was in detention that they were using this provision and the Anti-Terrorism Law to hold detainees legally for up to 60 days, pending judicial review.

This limit does not meet the requirement in international law that judicial review of detention should take place “promptly,” the groups said. Furthermore, several former detainees interviewed by the organizations said that they had been held without judicial review even longer than the 60 days permitted by Syrian law.

A source close to Darwish’s family told the organizations how challenging it has been for him to fight the charges against him under the terrorism law and before the terrorism court. He did not have access to a lawyer or any family members for nine months and 20 days before being sent to Damascus Central Prison, commonly known as ‘Adra prison. He was not informed that he would be tried before a terrorism court until November 30, the date an investigative judge in the terrorism court began interrogating him. Even then, he was not informed of the charges against him until an indictment was issued on February 27, over a year after he was detained.

On May 15, the United Nations General Assembly passed a resolution, calling, among other things, for the Syrian government to release Darwish and the other imprisoned SCM staff. The resolution stressed the importance of ending impunity and holding to account all those responsible for serious violations or abuses of international human rights and humanitarian law.

On May 9, an international peace delegation led by the Irish Nobel prizewinner Mairead Maguire, in conjunction with quasi-governmental Mussalaha, met with the Syrian justice minister, Dr. Najm al-Ahmad, and presented a petition for the release of 72 non-violent activists, including Darwish, Gharir, and Zaitani. Dr. al-Ahmad announced in his meeting with the delegation that the government had in principle approved the release of all the prisoners on the list, pending review of their cases. The organizations urge the relevant authorities to follow through with this commitment and release the detainees.

18. Syrian Center for Media and Freedom of Expression (SCM)

19. The Observatory for the Protection of Human Rights Defenders, a joint programme of the International Federation for Human Rights (FIDH) and the World Organisation against Torture (OMCT)