Although pardoned by the court, Tal is still not free 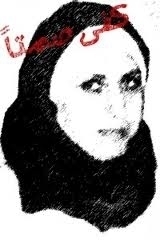 Where is Tal Al-Mallouhi? The Syrian blogger who has been detained since 2009 was missing and held incommunicado after the approval of the Criminal Court in Damascus on October 24, 2013 on the request for an exemption from a quarter of her original sentence of five years in prison as ruled by the Supreme State Security Court on February 14, 2011 on the charge of "disclosing information to a foreign country that must remain a secret for national safety." [The Criminal Court ruled Al-Mallouhi was] to be released immediately in the case that her detention was not required in any other case.

However, Tal Al-Mallouhi was taken from Damascus Central Prison, Adra, to the National Security Bureau where judiciary sources reported on October 26, 2013 that “Tal was transferred to the Office of National Security to be released from there.” Note that so far there has been no news to confirm her release.

Tal Al-Mallouhi (born April 11, 1991) was arrested at the age of eighteen by the Department of State Security after being summoned for questioning regarding her blogging and website activity. Tal Al-Mallouhi spent eleven months of enforced arrest, during which she was exposed to torture and ill-treatment, with no announcement [made] regarding her location or fate, without allowance for her family, lawyers, or other visits anywhere else before being passed to the women's prison (previously Doma) where she was put in solitary confinement as reported by several sources before she was presented to the Supreme State Security Court on November 10, 2010.

There were wide solidarity campaigns for Tal Al-Mallouhi, who was the youngest blogger arrested in Syria, and Internet users all over the world have organized a mobilization to demand her release.

Also, many international, Arab, and Syrian human rights organizations condemned her arrest, the ill-treatment she has suffered, and even her trial—about which Tal’s defense lawyer, Khalil Matouk, mentioned “Tal Al-Malouhi’s case was not considered by a competent, fair, and public court which meets the international standards for fair trials, and we emphasize the need for a retrial for her, especially since the decision pronounced by the Supreme State Security Court has not been approved by the competent authority, the customary vice-governor.”

The Syrian Center for Media and Freedom of Expression is very worried and concerned about the fate of Syrian blogger Tal Al-Mallouhi, and deeply disapproves of the practices of the Syrian government, which violated all laws and all legal and international agreements. Hiding Tal Al-Mallouhi in this way raises the greatest fears for her life and her physical and psychological safety. It is a flagrant violation of constitutional human rights, especially since the court that sentenced Tal to five years in prison—it was a special court—was dissolved and ceased functioning after Legislative Decree No. 53 dated April 21, 2011, a move that the Syrian government presented as [part of] reforms to restore the confidence of citizens in the government after the revolutionary movement that erupted in March 2011. Hiding her in this case is a breach by the Syrian government of the Syrian judiciary’s decisions. That is what the Center appears to be very worried about it, because it confirms the continual and aggravated domination of the security institution in Syria over all aspects of the state and its institutions, including the parliament and the cabinet ministers.

The Syrian Center for Media and Freedom of Expression demands the Syrian authorities immediately disclose the fate of Tal Al-Mallouhi and release her unconditionally, and charges these authorities with full responsibility for ensuring her safety and life, and calls on all justice organizations concerned with the defense of human rights and prisoners of conscience to work and pressure the Syrian government to stop its disgraceful violations of human rights, and all practices that violate all constitutional and legal rights of the Syrian citizen.