A petition to release Mazen darwish and his colleagues 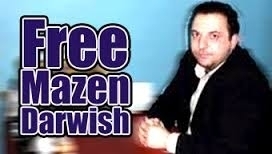 Human rights activist, journalist and president of the Syrian Center for Media and Freedom of Expression (SCM), Mazen Darwish, was detained on the 16 of February 2012 following a raid of the SCM'S office in Damascus by Air Force Intelligence officers of Syria. All of the staff and visitors of the office were also detained.

During the first nine months following their forced disappearance and detention there was no information released about them. The seven members of the SCM's staff and visitors that were detained eventually stood on trial at the Military Court in Damascus and it was ruled, at that time, that their detention period was sufficient. It is worth noting that the Legislative Decree dated 30 of November allowed the families of the five detainees (Mazen Darwish, Hani Al Zeitani, Hussein Ghareer, Mansour Al Omari and Abdul Rahman Hamada) to see them for the first time after months had past, during which time these detainees were subjected to severe torture in the Air Force Intelligence branches and in a 4th division branch. The five detainees were referred to the special Anti-Terrorism Court which decreed the release of Mansour Al Omari and Abdul Rahman Hamada in February 2013 but continuing their trial.

After about two and a half years Mazen Darwish, Hussein Ghareer and Hani Al Zeitani are still in the Damascus Central Prison on trial at the Anti-Terrorism Court charged under article (8) of the Terrorism Law which was created following their arrest. Syrian authorities continue to ignore the international, humanitarian and human rights appeals launched by dozens of Syrian, Arab and international human rights organizations asking for their release.

During the last two and a half years, the Regime has emptied Syria of peaceful, human rights and civil voices and replaced Syrian society to calls of hatred, violence, militarism and to a destructive war machine. The Syrian authorities continue to ignore all the irrefutable evidence of the fact that Mazen Darwish and his colleagues were detained arbitrarily as this action goes against UN decision No. 67/262 dated 15 of May 2013 under the name "The situation in the Syrian Arab Republic" demanding openly and directly that the Syrian government immediately release Mazen Darwish and his colleagues. It also goes against the decision of the UN experts regarding arbitrary detention in decision No. 43/2013 dated 16 of January 2014 according to which detention of Mazen Darwish and his colleagues were found to be included as an arbitrary detention and it called for the immediate release of them.

In March 2014, 61 International, Arab and Syrian organizations signed a petition demanding the Syrian authorities to immediately release the three detainees according to the UN decision No. 2139 which was adopted on 22 of February 2014 and demands to put an end to arbitrary detentions, torture, kidnapping and forced disappearance immediately and to release all people who are detained arbitrarily.

However, today we find ourselves faced with the indifference of the anti-terrorism court of the Legislative Decree No. (22) issued on 10 June 2014 from the President of the Republic, which grants explicitly a general amnesty for all crimes committed before 9 of June 2014 according to the following:

Ignoring the explicit text and referring the case to the defense despite these charges being covered by the presidential amnesty, which warns only for the worst, and it is possible that the court will elude the Syrian law and the legislative decree adding false charges to aggravate the situation of the detainees: Mazen Darwish, Hussein Ghareer and Hani Al Zeitani by using flexible legal formulas to weaken the spirit of the nation and the protection of the national security.

During these years many questions have emerged regarding the case against the detainees of SCM (Syrian Center for Media and Freedom of Expression), and at this time the Syrian government is bragging that they are eliminating the situation of the increased numbers of armed men, it also continues to arrest those who stand against all kinds of violence and against the use of weapons?!! At a time in which the government itself is demanding an increase in participation with the internal opposition, it continues to detain the most important peaceful, civil and human rights activists?!! Furthermore, at a time in which it calls to dialogue between Syrians, it continues to detain people with a Free National thought?!!! And, most important, at a time in which the Syrian government confirms the principles of law and justice, it puts on trial a lawyer, a civil and peaceful activist, a human rights activist such as Mazen Darwish to appear in front of an anti-terrorism court?!!!

We the signatories of this statement declare our concern about the destiny, life and safety of these three detainees as prisoners of conscience in Syria, and we call for the Syrian government to observe the practices of the anti-terrorism court in Syria if this government is really trying to work towards a national reconciliation in Syria.

Every person has the right to a fair public trial and is innocent until proven guilty, but if the court system in Syria is turned into a punishment based on personal decisions targeting unarmed civilians on the basis of different political points of view, then this is beyond all norms, laws and legislation.

We call for the Syrian government to immediately release Mazen Darwish and those who are with him without conditions, as well as all the prisoners of conscience in Syria.

Abdullah Hassan – a journalist and a photographer – Bahrain.

33.  Ayman Gojal – Center for Documentation of Violations in Syria – Syria.

66.  Haitham Hakki – director and producer of television and film – Syria.

Leila Suef – Teacher at the University of Cairo – Egypt.

Lorenzo Trombetta, a researcher and a journalist – Italy.

Mahmoud Mahmoud – a doctor and a political activist – Syria.

Sayed Mahmoud / poet and a journalist in "Al-Ahram" newspaper – Egypt.

Tarek Alghorani– “Tunisia Center” for Freedom of the Press.