The majority of respondents, which amounts to 67.6%, said there is one or more particular sect that benefits from the political authority than others. Nearly all respondents referred to the Alawites and Shiites 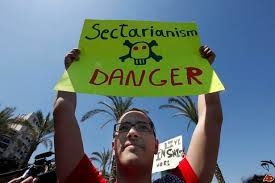 The Day After (TDA) conducted a field survey that included 2,498 respondents; 1424 men and 1074 women. Substantial research on the matter of sectarianism has been nearly impossible as the subject was considered a taboo, prior to the 2011 uprising.

The survey represents a significant and indicative snapshot of Syrian attitudes toward sectarianism, in a manner never before achieved in Syria. The circumstances induced by the war in Syria make it impossible to pull a fully representative sample of the Syrian population, given that there are many inaccessible areas either because of active violence or because of the control imposed by the armed forces. Thus, researchers have worked within these limits to create indicative yet not necessarily comprehensive samples, nevertheless providing valuable field data intended to enable a better understanding of Syrian society. The survey takes into account the different demographic and social factors in Syria and compares the results among various population groups.

The study aims to improve key groups’ knowledge about sectarianism, including the Syrian population, current policy makers, academics and researchers, and future Syrian policy makers. Subsequently, this study will help future decision-makers in Syria formulate new policies to overcome sectarianism and build a state based on equal citizenship and civic responsibility.

The findings present some key implications about the current political context and future considerations for Syria.

Most respondents recognized the seriousness of the sectarian situation in Syria and are aware that its causes are linked to the state and political authority. Most respondents (65.3%) still call for a state based on citizenship and equality and deem it to be the optimal solution to overcome the sectarian problem. This study also demonstrates that the Syrian government and its institutions constitute an essential source of sectarian discrimination, spread and development of feelings of injustice, and distrust among individuals of different sects.

The Syrian Arab Army ranked first in being responsible for sectarian discrimination, 60% of respondents mentioned it, followed by the intelligence services (55.3%) and government departments (52.8%). The least mentioned contribute to sectarianism was the FSA (14%).

The majority of respondents, which amounts to 67.6%, said there is one or more particular sect that benefits from the political authority than others. Nearly all respondents referred to the Alawites and Shiites.

The answers provided by Sunni respondents demonstrate a near consensus on supporting the 2011 demonstrations of the opposition, whereas Alawites’ and Shiites' answers demonstrated a position against them. More than half of Christian respondents and the largest proportion of Murshidis support them (48.4%) whereas a very considerable proportion of Druze and Ismaili respondents opposed them.

About three-quarters of respondents said they had been subjected to sectarian discrimination (personally or a family member or relatives), and only 28.5% said they have never been exposed to it.

Only 13.6% said they do not approve of the following statement: “Sectarian discrimination was a main impediment to the achievement of my most important aspirations” and Sunnis’ responses formed the highest approval percentages (93.8%) while it hit its lowest level in the responses of Alawites and Shiites.

The study demonstrates overwhelming support for measures to eradicate institutional sectarianism. Survey respondents agreed with all the proposed solutions, with the exception of “dissolving intelligence services” which a majority of Alawites and Shiites rejected. The other proposed measures were: dissolving all armed groups and rebuilding the army in Syria on national bases; dissolving intelligence services; restructuring government institutions on the basis of equal opportunity; inclusion of materials for citizenship and equality-based education in school curricula; prohibiting entities that resort to sectarian incitement; a comprehensive national dialogue among the various sects in Syria; training preachers in mosques to disseminate a tolerant discourse that is not based on compulsion.

Read the entire study in English