U.N. Security Council Resolution 2139 referred specifically to Daraya, calling for all parties to lift sieges, yet it remains besieged to this day, and was missing from the list of priorities in the International Syria Support Group’s February Munich Statement 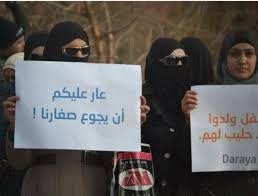 While the recent decrease in bombing and bombardments in Syria has provided a welcome relief for many Syrians, the deteriorating situation of besieged communities remains highly concerning. The use of starvation as a weapon is a war crime, and the practice must stop immediately. As parties to the Syria talks gather in Geneva this week, it is essential that lifting sieges is at the forefront of any discussions about political transition in Syria.

The successful aid drop this week to Deir-ez-Zor, the largest city in the east of Syria, shows that it is possible to break sieges when there is political will, and the option should be seriously considered for other besieged areas. According to the World Food Program, 22 out of the 26 food pallets were collected by the Syrian Arab Red Crescent. However, a source in Deir-ez-Zor warns that SARC is closely linked to the Syrian military and security. This underscores the need to independently monitor the distribution of aid to ensure aid reaches those in need.

The same political will is required to break sieges throughout Syria, including Daraya, “the capital of nonviolence” that has been besieged since November 2012. Since U.N. Security Council Resolution 2139 was unanimously adopted in February 2014, the U.N. Security Council has been referring specifically to Daraya in its resolutions calling for all parties to lift sieges, yet it remains besieged to this day, and was missing from the list of priorities in the International Syria Support Group’s February Munich Statement. This inconsistency between the U.N. and ISSG lists suggests that the decision to exclude Daraya is political. According to Siege Watch’s first quarterly report, Daraya is one of the communities suffering from the highest level of siege, tier 1. Renewed peaceful protests by women in Daraya calling for aid deliveries to Syrians on the verge of starving to death must be heeded.

Lifting sieges is just one measure that has to be taken for any political process to gain the trust of the Syrian population so that a meaningful transition can take place. Parties to the conflict must also stop attacking civilians and civilian infrastructure, and end the use of indiscriminate and banned weapons, as well as the use in populated areas of explosive weapons. An agreement on the release of political prisoners and disappeared persons is also critical. Members of the ISSG must use their leverage on parties to the conflict to ensure these measures are enacted before engaging in serious discussions about political transition, or else the process will have no chance at success.

For an interactive map with detailed information about sieges in Syria, visit www.siegewatch.org.