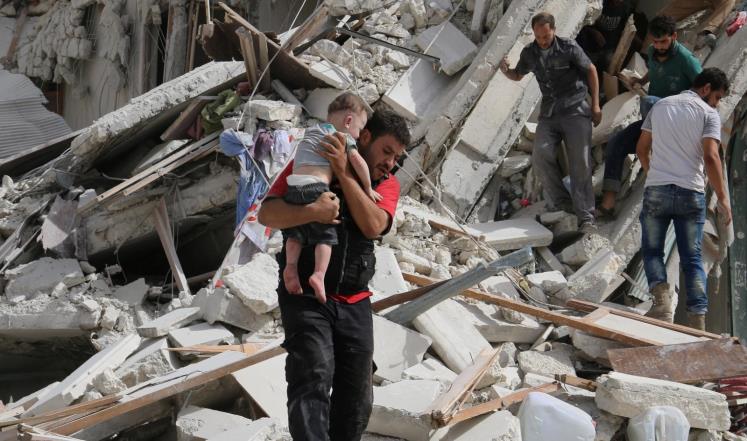 Twenty-two academics and university professors have launched a petition this morning, calling for EU sanctions against Russia for its bombardments on Aleppo. The signatories developed the petition with a group of experts in international relations and international law. Below is the statement text:

Stop the Slaughter in Aleppo

During recent days the city of Aleppo has witnessed an unprecedented carnage. The Syrian government together with the Russian Air Force has implemented a campaign of intense, continuous and indiscriminate aerial bombardment, spreading death and despair among the 250,000 inhabitants of the besieged neighborhoods of Aleppo.

Attacks on the civilian population are deliberate and include the destruction of hospitals, schools, markets, homes, water facilities, humanitarian supplies and aid workers. Incendiary bombs have set neighborhoods on fire, while so-called “bunker-buster” bombs have even destroyed the underground shelters where people sought safety. The Secretary General of the United Nations Ban Ki-moon has stated that the current situation in Aleppo is “worse than a slaughterhouse.”

The violence in Aleppo forms a low point in the Syrian crisis, which has caused human suffering on a massive scale over the past five years. An estimated 400,000 Syrians have died as a result of the violence and more than 10 million have been displaced. What started as a peaceful uprising in 2011 has turned into an unimaginably bloody war that has drawn in regional players. With the involvement of superpowers on opposite sides of the conflict, the country has effectively become a chess board on which the world’s most powerful states pursue their geopolitical interests, while the world’s most vulnerable civilians are subjected to the cruelest possible violence every day.

The aerial campaign will now be reinforced by a ground offensive during which the Syrian Armed Forces will be supported by foreign militia and the Russian Armed Forces. This campaign is likely to lead to a mass slaughter of civilians during the upcoming weeks and months.

The brutal nature of the violence and the scale of human suffering necessitate immediate action by the international community. While all sides of the conflict contribute to the violence, the ongoing Syrian-Russian assault on Aleppo stands out in its brutality and preventability. Therefore, pressure on the Russian government must be increased until it withdraws its military support for the criminal campaign and enables unimpeded access to humanitarian aid.

Thus far, world leaders have been unable to formulate an effective strategy to end the violence. We call upon all members of the international community to live up to their responsibility to end the civilian suffering in Aleppo and take the following steps:

Immediate acknowledgement of the gravity of the crimes

Attacks on the civilian population include the deliberate targeting of hospitals, schools, humanitarian equipment, aid workers and water facilities. Lacking military necessity, these attacks on civilian targets constitute a widespread and systematic campaign of violence that forms part of a sectarian agenda pursued by the Syrian government. As such, civilian suffering cannot be discarded as ‘collateral damage’ but must be acknowledged as stemming from a deliberate campaign that constitutes a crime against humanity, as has been confirmed by the UN High Commissioner for Human Rights, human rights organizations and academic experts.

Immediate sanctions against governments aiding and abetting the crimes

While European and U.S. governments have invested political and military resources in their campaign against ISIS, the Syrian government is the prime perpetrator of international crimes on the Syrian territory. U.S. and EU policies must be aligned with this reality and international pressure must be increased on states that provide direct support to the Syrian government’s criminal campaign. Most importantly, the Russian government must be pressured to retreat its military support to the Syrian government’s assault on its own population. The failure, thus far, of world leaders to develop diplomatic solutions under the current conditions warrants the introduction of economic sanctions as a means of forcing change. While a range of economic sanctions against Russia have been in place since the Ukrainian crisis of 2014, we call for sanctions to be specifically targeted at individuals and entities that are implicated in the crimes committed against Syrian civilians.

Immediate prosecution of individuals responsible for the atrocities

The gravest of crimes are being committed by all sides of the conflict and throughout the Syrian territory. Delivering justice to the Syrian people cannot wait until a comprehensive political solution is reached. Individuals responsible for committing war crimes, crimes against humanity and genocide in Syria must be brought to account. The complexity and the scale of the crimes necessitate a long-term commitment of the international community to bringing justice to Syrian victims. This can be achieved through the establishment of an international criminal tribunal for Syria with a mandate to prosecute individuals on all sides of the conflict.

Acknowledging the gravity of the crimes, sanctioning governments that assist in their perpetration and holding individual offenders to account are crucial steps to protect the people of Aleppo and all other Syrians affected by the violence.