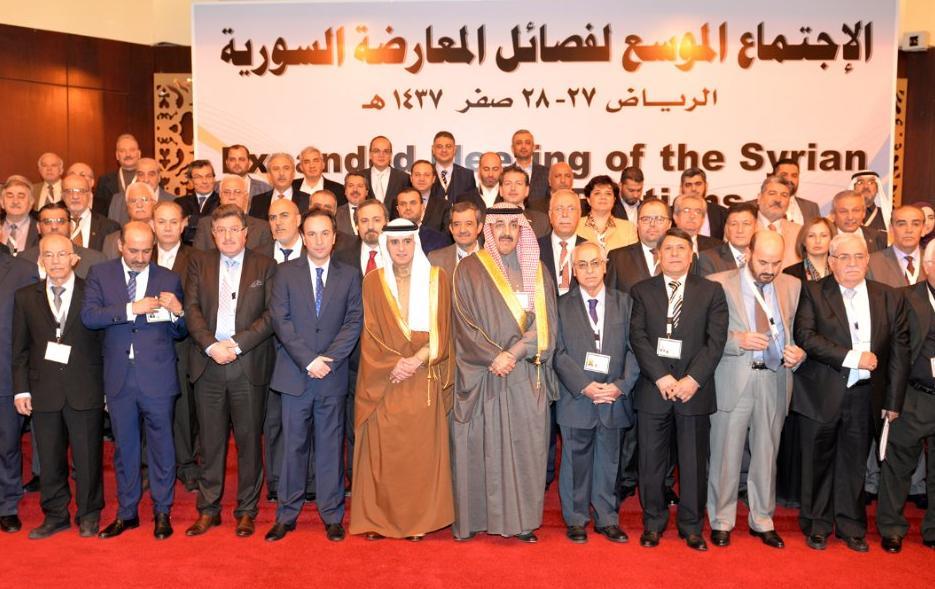 Syrian political opposition groups and figures have signed a joint statement condemning the outcomes of the Riyadh II conference. Among the signatories are members of the Damascus Declaration, the Syrian National Council and a number of local councils, in addition to renowned opposition figures including George Sabra, Samir Nashar, Mohamad Sabra, Suheir Attassi, Fares Helou and more than 150 others. Below is the text.

A statement to the Syrian people

To our steadfast people inside Syria and in the diaspora, you who have generously made great sacrifices of unparalleled blood and lives for your freedom and dignity.

Today, we are at a crossroads of the history of your great revolution, as many countries seek to maintain the head of the tyrannical regime, ignoring the crimes he has committed against the dignified Syrian people. The international and regional pressures have led to the formation of a new negotiating body that does not represent, in its composition or political vision, the objectives of the Syrian revolution to rid us of the rule of the Assad clan, which has committed disgraceful crimes that have been classified internationally as war crimes and crimes against humanity. Rather than responding to the people’s demands being the necessary, inevitable condition for a political solution and for the establishment of security, peace and stability in our country, the participants of the Riyadh II meeting chose to bow to pressure and meet the Russian solution, away from the political transition needed to reach a state of freedom, dignity and citizenship; a state of a pluralistic democratic system for all Syrians of all positions and affiliations.

The new body [the Syrian Negotiation Commission] has altered the goal of a political settlement, which called for the transfer of power from [President Bashar] al-Assad to a transitional governing body with full powers leading this phase. [They replaced this goal with] drafting a new constitution and holding elections under the auspices of the United Nations. This is a blow to the essence of the political transition, which must be fundamental in accordance with the Geneva I statement of 2012 and the reference to political transition and negotiations in accordance with [United Nations] Security Council resolutions 2118 and 2254.

This alteration has been combined with a radical change in the structure of the negotiating body and its delegation, to become closer to the approach of reconciliation with the regime, and to respond to the wishes of those who are close to the regime and want to keep its head and its foundations in the transition period and beyond. The departure of Assad and his gang has changed from being a prerequisite to enter the transitional phase into a point of view for some of the participants, as expressed in the final statement. The position, which respects 1 million martyrs, hundreds of thousands of detainees and enforced disappearances, hundreds of thousands of war victims, and millions of orphans and mourners, has disappeared. The statements made by members of the Moscow platform — known for their loyalty to the regime and who have repeatedly attacked the Syrian revolution publicly — have clearly revealed this dangerous transformation, negating the legitimacy of this new body in representing the Syrian revolution and its aspirations. And here it goes: The revolutionary bodies and organizations at home and abroad express this.

We have warned in a previous statement of these grave dangers, and we hope that they will not fall into it. Unfortunately, it is clear that our appeals were not heard by the participants at the Riyadh II conference. Therefore, and based on all the above, we:

– Reject the outcome of the conference held in Riyadh on Nov. 22-24, 2017, which combined some Syrian opposition groups with some supporters of the Assad regime [the Moscow platform]

– Stress that the departure of Bashar al-Assad at the beginning of the transitional period is a non-negotiable principle, and it is essential for any meaningful political transition

– Condemn the selective manner in appointing the negotiating body that produced a team which contradicts the positions of many of its members with the aspirations of the Syrians to engage in a real political transition; one that begins by expelling the tyrannical symbols responsible for the killing, displacement and destruction that Syria has undergone over the past years

– Consider the independence of the Syrian national decision a central issue, which is expressed in the extent of commitment to the principles of the revolution and respect for the blood of martyrs and the sacrifices of our people. What has transpired is a concession in favor of external wishes contrary to the will of the Syrian people and interests

– Recall that political realism requires anyone who commits crimes of genocide against his people — comparable only to Nazi crimes — to be punished in proportion to what he committed, and not to be rewarded by staying in office and a restoration of legitimacy