Ministerial delegations from Syria met with their counterparts from Jordan and Lebanon to discuss cooperation in various fields, according to SANA. 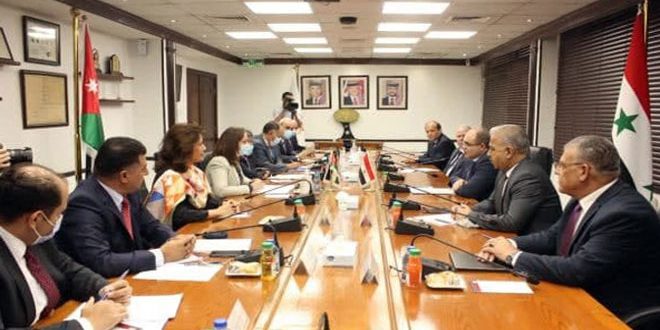 The meetings aim to revitalize the economic relations between the two brotherly countries as well as the resumption of trade exchange which profits to both, according to the Petra Agency.

On both sides, the delegation comprises the Ministers of Economy and Foreign Trade, Water Resources,  Agriculture and Agrarian Reform, and Electricity.

The Jordanian Ministry of Interior said that the Nasib-Jaber border crossing between Syria and Jordan will be re-opened on Wednesday, under technical and logistical procedures for the resumption of freight traffic and travelers.

Read Also: How the Regime Benefits from the Passage of Iranian Oil to Lebanon

The Ministry said in a press statement on Monday that this decision comes to revitalize the commercial and tourism movement between the two brotherly countries.

A joint technical team from the Petroleum and Mineral Resources Ministry, and the Lebanese Energy Ministry began on Monday to check the Arab Gas Pipeline starting from the al-Dabousieh plant on the Syrian-Jordanian border towards the Deir Ammar power plant in Lebanon.

The Ministry said in a statement to SANA, that the team is expected to complete its works and provide its report on Tuesday on the technical readiness of the gas pipeline at the Lebanese side.

At a meeting held in the Jordanian capital on September 8th, the Ministers of Petroleum and Energy in Syria, Jordan, Egypt, and Lebanon, agreed on a plan to supply Lebanon with Egyptian Gas.