The Foreign Minister of the regime, Faisal Mekdad, met his Cuban and Kazakh counterparts cooperation during the 76th session of the UN general assembly, according to SANA. 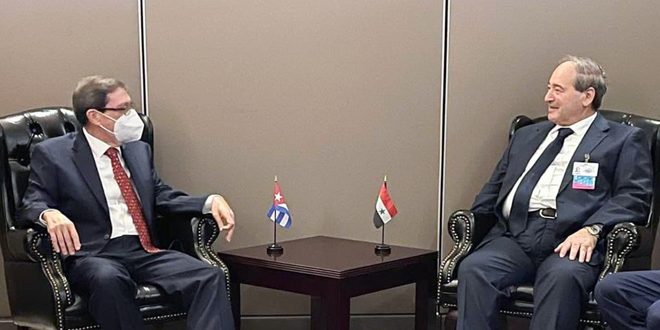 On the sidelines of the 76th session of the UN General Assembly, Foreign and Expatriates Minister Dr. Faisal Mekdad has discussed with his Cuban counterpart Bruno Rodriguez means to develop the bilateral relations between the two countries and the coordination regarding the items on the agenda of the current session.

Viewpoints converged on the necessity to enhance coordination between the two sides and with other friendly countries to face all the attempts of foreign interference in the internal affairs of the member states and about condemning all the forms of siege and inhuman unilateral coercive measures imposed by some countries.

Both sides stressed the necessity to lift these measures immediately due to their catastrophic impacts on the targeted peoples in Syria and Cuba, particularly in light of the outbreak of the coronavirus pandemic, and because these measures violate international law and provisions of the UN Charter.

Minister Mekdad expressed Syria’s appreciation for Kazakhstan’s hosting of the meetings held within the Astana format, stressing the importance of these meetings in achieving tangible results on the ground, especially in the field of preserving the Syrian territorial integrity and in the fight against terrorism.

He underlined the importance of Kazakhstan’s participation in reconstruction and investment projects in Syria to serve the interests of both countries.

Meanwhile, the Kazakh minister affirmed his country’s readiness to continue hosting meetings held within the Astana format, which would contribute to enhancing security and stability in Syria, expressing his country’s interest in developing cultural relations that reflect the historic ties between the two countries.