Pedersen discussed with the Syrian opposition the new constitution talks and how to ensure that the political process achieves some progress, according to al-Souria Net. 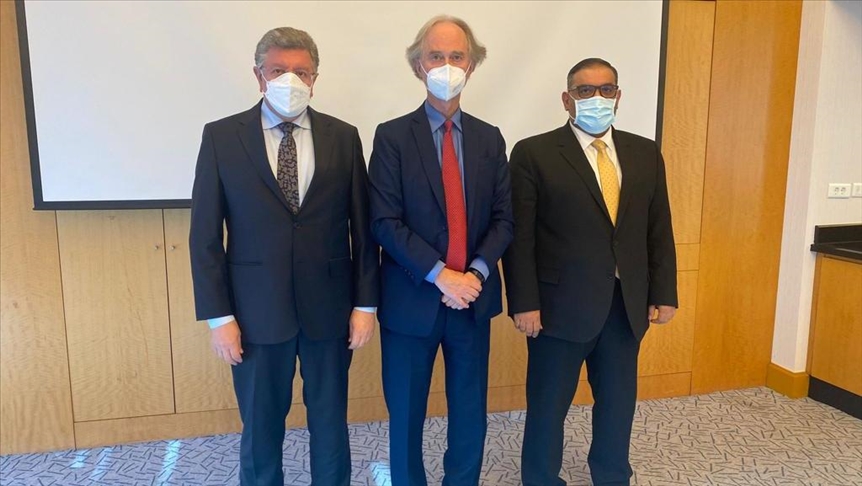 Ahead of fresh meetings of the Syrian Constitutional Committee in Geneva, UN Envoy to Syria Geir Pedersen intensified his recent meetings with the involved parties. The most recent meeting was with the opposition delegation, and took place on Tuesday, in Istanbul.

Pedersen met in person with Salem al-Meslet, the head of the Syrian Opposition Coalition, and Anas al-Abda, the president of the High Negotiations Committee. Hadi al-Bahra, the head of the opposition delegation to the Constitutional Committee, and Abdul Ahad Astifou, the coalition’s vice-chairman, joined the meeting by video.

Yahya al-Aridi, the spokesman of the Syrian High Negotiations Committee, revealed to the Al-Souria Net website details from the UN Envoy meeting. Aridi indicated that the meeting’s purpose was to outline the latest developments and allow all parties to accept Pedersen’s proposal for the Constitutional Committee’s approach and work plan, which would lead to further progress.

According to Aridi, the “negotiating body” assured the UN envoy of its approval of the proposed methodology. It did not, however, believe that it would be possible to hold the sixth round of meetings without formal approval from all parties, and a guaranteed commitment to work under it.

Details remain unknown about Pedersen’s proposed methodology for the Constitutional Committee’s work. The proposal should receive a response from the regime in the next few days.

Read Also: Pedersen in Damascus to Discuss Sixth Round of Geneva Constitutional Committee

Pedersen visited Damascus on Saturday, during which he met with Faisal al-Mekdad, the Syrian regime’s foreign minister. This move amounted to an attempt to revive the Constitutional Committee.

During its meeting with Pedersen, the opposition delegation also touched on the issue of detainees being held in the regime’s prisons. The delegation noted that “there is no credibility for any political process if it does not secure the detainee’s release, as well as knowing the fate of those who are missing.”

“It is also important to stress the importance of agreeing on a comprehensive ceasefire in Syria and therefore establish a positive environment in which the political process can take place.”

There was talk of the possibility of holding a meeting of the sixth round of the Constitutional Committee last Ramadan; however, the Assad regime’s preparations for the “presidential elections” prevented the talks from happening.

Pedersen is expected to visit Russia later to discuss the sixth round of meetings.

In March, Russian Foreign Minister Sergei Lavrov said that the next round of meetings of Syria’s Constitutional Committee in Geneva would be “substantively new.”

Lavrov added that the next meeting will involve a new element not witnessed in the previous rounds. He was referring to a face-to-face meeting between the head of the regime delegation, Ahmed al-Kuzbari, and the head of the opposition delegation, Hadi al-Bahra.