A summit was held in Moscow between Assad and Putin, during which they discussed bilateral cooperation between the two countries, according to SANA. 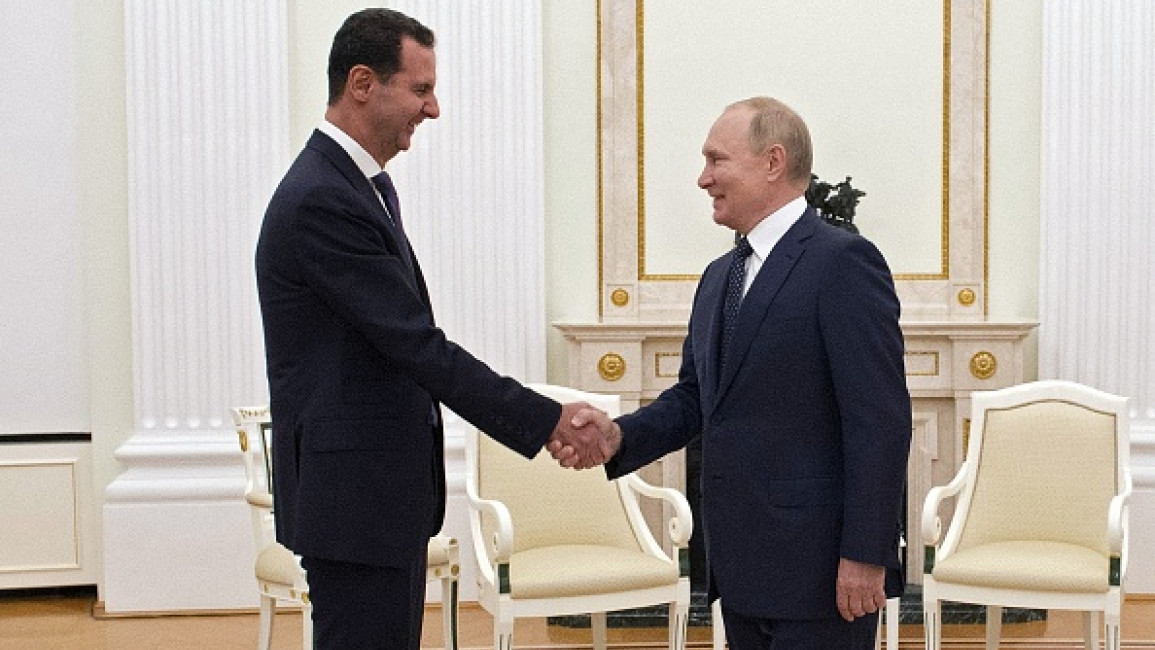 A Syrian-Russian summit was held in Moscow between Presidents Bashar al-Assad and Vladimir Putin during which they discussed the files of the standing bilateral cooperation between the two countries and the measures taken to expand and develop it to achieve the common interests.

The summit, which began with a lengthy bilateral meeting between the two presidents, and which was joined later by Foreign and Expatriates Minister Dr. Faisal al-Mekdad and Russian Defense Minister Sergei Shoigu, discussed the cooperation between the armies of the two countries in the process of combating terrorism and completing the liberation of lands which are still under the control of terrorist organizations.

Talks also tackled the steps taken on the political track, as the two sides stressed the importance of completing work on this track to reach a consensus between the Syrians without any foreign interference. The discussions also touched on areas of economic cooperation between the two countries.

Presidents Assad and Putin also discussed the latest developments in the regional and international arenas.

At the beginning of the bilateral summit, President Assad said, “I am happy to meet today in Moscow. The joint operation to combat terrorism has now been going on for about six years, during which the Syrian and Russian armies have made great achievements, not only by liberating lands or by returning refugees to their cities and villages, but also through protecting many innocent citizens in this world because terrorism knows no political borders and does not stop at political borders.”

President Assad added, “of course, in addition to the important results of the liberation of lands and the retreat of terrorists, the political process was launched, whether in Sochi, Astana, or recently in Geneva. This process has been going on for nearly two years now, but as you know, there are obstacles because there are countries that support terrorists and have no interest in the continuation of this process in the direction that would achieve stability in Syria, and some countries have imposed a siege on the Syrian people, a siege that we describe as inhumane, immoral and illegal. Nevertheless, we are determined in Syria, as a government and state institution, to proceed in parallel in the process of liberating the lands and in the process of political dialogue.”

President Assad said that today’s visit is an important opportunity to discuss these two points, in addition to the bilateral relations that our team of specialists in the two governments will follow up in parallel with our meeting.

President Assad added, “I want to take advantage of this meeting to thank the Russian state and the Russian people for the humanitarian aid provided to the Syrian people, whether in connection with the recent Coronavirus pandemic or about securing all the necessities that the Syrian citizens require in their daily life.”

“I would like also to thank you and the Russian political institution, especially the Ministry of Foreign Affairs, for the efforts they have made at the international forums to defend international law, which at the very outset provides for the sovereignty of states and the right of peoples to determine their future and destiny, which managed effectively and strongly to prevent the exploitation of the anti-terror operation in the world for political goals that serve the agendas of some countries,” the President said.

For his part, President Putin said, “I am very happy to welcome you to Moscow again and congratulate you on the very good result of the presidential election. These results show that people trust you, despite all the difficulties and tragedies of previous years, and they associate the process of reconstruction and the return to normal life with you.”

Putin added, “I know that you are doing a lot for this, including holding a dialogue with the opposition, and I hope this process will continue,” noting that the solidarity among all the forces in Syria allow the country to rise again and start to progress and move forwards.”

“A lot has been done for this, and with our joint efforts, most of the Syrian lands have been liberated, after inflicting very heavy losses on terrorists, and the Syrian government now controls 90 percent of the territory,” Putin added.

During his meeting with Assad, Putin stressed that the main issue is that foreign armed forces are deployed to Syrian territory without the approval of the United Nations and permission from the State, and this clearly contradicts international law and hinders efforts to take the path of reconstruction of the country at the pace that would have been possible had the legitimate government took control of all lands.

“Unfortunately, there are still hotbeds for terrorists who not only control a certain area but also continue to terrorize the civilian population,” Putin said.

Putin noted that despite this, the refugees are actively returning to the liberated areas. “When I was in your hospitality, at your invitation, I saw how people are actively reconstructing their homes and working to return to normal life in the full sense of the word, and our joint efforts are also yielding fruitful results.”

Putin added, “I am not talking now about just humanitarian assistance from Russia to the Syrian people, but also about the development of economic and trade relations, as the volume of trade exchange during the first half of the year increased three and a half times… and we are working together to solve the main issue that the whole of mankind is currently facing. By this, I mean the fight against the Coronavirus pandemic, as the first consignments of the ‘Sputnik V’ and ‘Sputnik Lite’ vaccines arrived in Syria. I hope that with joint efforts, the Syrian people will be helped to rise through contributing to revive the economy, the social situation, and the field of health in the first place.”

During the meeting, a deep evaluation of the formulas and projects of economic cooperation between the two friendly countries was conducted, as well as a discussion of several joint agreements and projects in the fields of agriculture, industry, energy, water, and information technology, in addition to the measures taken to facilitate and enhance trade exchange between the two countries, emphasizing the pivotal role of the business sector in the two countries in this field.

The talks between Putin and Assad also dealt with the reality and prospects of providing the appropriate environment to encourage joint investments in projects that create added values in the interest of the two friendly countries and peoples, and the ongoing preparations for holding the thirteenth session of the Governmental Committee, where the two sides expressed their satisfaction with the efforts made in the framework of developing economic relations.