The ambassador of India to Syria discussed with PM Arnous means of enhancing cooperation between the two countries, the Syria Times writes. 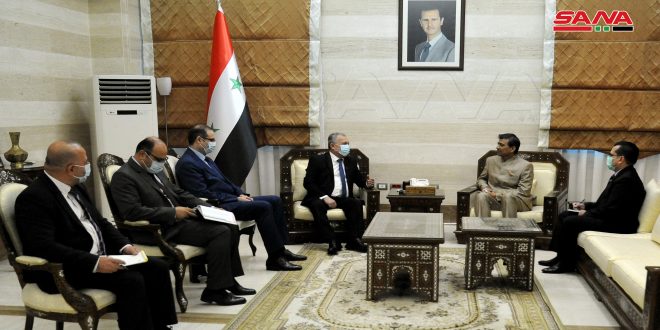 Prime Minister Engineer Hussien Arnous discussed on Wednesday with the Ambassador of India to Syria Mahender Singh Kanyal ways of developing cooperation and bilateral relations in the technical, industrial, scientific, cultural, and health sectors and building capabilities and human resources.

According to the Syrian News Agency (SANA), the premier underscored the need to activate the work of the joint Syrian-Indian committee and implement bilateral agreements and memorandums of understanding. He also stressed the importance of completing cooperation projects for the common interest of the peoples of India and Syria.

Arnous thanked India for supporting Syria at international meetings and for rejecting both the unjust siege being imposed on Syria and the attempts of foreign intervention in Syria’s domestic affairs.

He invited Indian companies to take part in the process of reconstruction in Syria, asserting Damascus’s determination to enhance relations with New Delhi and to open new horizons for bilateral cooperation.

For his part, the Indian diplomat asserted that India is a real friend of Syria and the two countries have the same viewpoints towards several regional issues.

He affirmed that his country will go ahead with offering technical and humanitarian aid to Syria and to build capabilities upon the needs of Syria.