An official told the al-Hurra TV Station that the U.S. military presence in Iraq and northern Syria will remain for the time being, according to al-Modon. 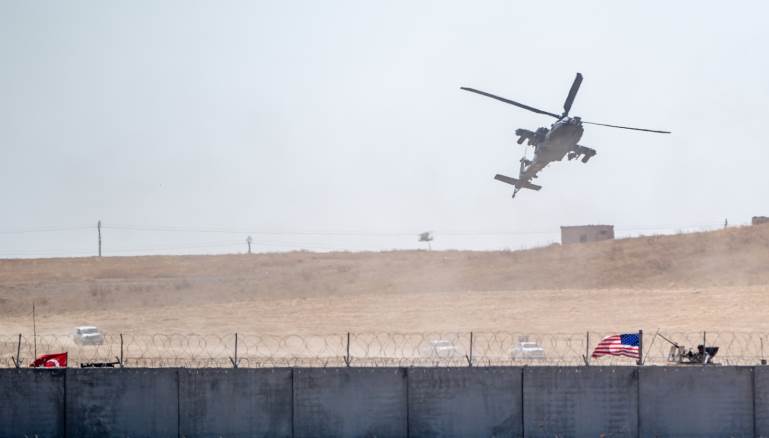 Acting Assistant Secretary of State for Near Eastern Affairs, Joey Hood, said that the United States’ mission in Afghanistan has been “completed,” while the U.S. military presence in Iraq and northern Syria will remain.

In an interview with al-Hurra TV, Hood assured Iraqis and the Syrian Democratic Forces (SDF) — whom he considered “U.S. partners in the war against ISIS” — that American forces would remain in the two countries in the coming period.

“I want to say unequivocally that Afghanistan is neither Iraq nor Syria, while our mission in Afghanistan is complete,” Hood said. “Our interests in Iraq will continue over time, and this includes not only security but also helping Iraqi security forces and the SDF to defeat ISIS once and for all. This will take time,” Hood said.

On the Syrian regime’s recent military escalation in Daraa governorate, Hood said: “We raise our voice to condemn Assad’s destruction of his people and we will continue to do so. Our army in Syria is fighting ISIS, which is the only reason for the army’s presence there. We are not seeking regime change in Damascus. But we are certainly trying to change the actions of the Assad regime. This is why we have sanctions like Caesar Act, amongst other measures that confront the regime and its supporters over the years. The fact remains, however, that we are not in Syria to fight Bashar [al-Assad]; we are there to fight ISIS.”

“We want to work with the international community to change the actions of the Assad regime to allow humanitarian access and maintain ceasefire agreements so that people can start living a healthy life again. But this is not possible when the Assad regime persecutes its people simply for protesting and demanding better living conditions.”

Read Also: Will the U.S. Withdraw from Syria as it Did from Afghan Base?

The Washington Post reported that SDF, based in northeastern Syria and backed by the United States, remains alert and concerned after the withdrawal of U.S. soldiers from Afghanistan. This comes despite recent assurances that there will be no change to the U.S. presence in Syria.

The newspaper noted that SDF has not yet forgotten the “painful memories” of the previous U.S. withdrawal three years ago. On that occasion, [President] Donald Trump abruptly announced the withdrawal of 2,000 US troops allied with SDF against ISIS.

In recent months, the Administration of President Joe Biden has sought to reassure SDF. The Administration sent the commander of the Central Command, General Kenneth McKenzie, as well as the U.S. Assistant Secretary of State for Middle East Affairs, Joey Hood, to the region to talk with them. U.S. officials and others from the SDF quoted the administration as saying that the partnership with the SDF remains strong and that US soldiers will not leave.