A Russian delegation visited the headquarters of the 8th Brigade in Bosra al-Sham, to discuss the recent developments in Daraa, according to Syria TV. 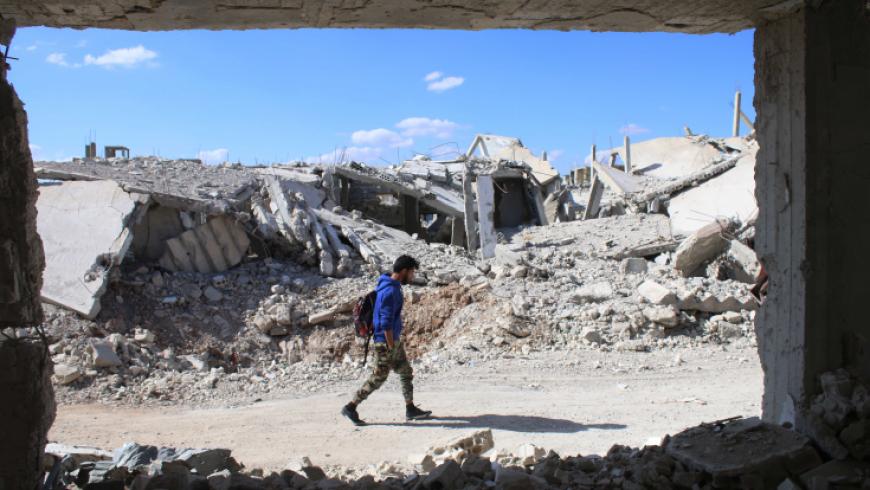 On Thursday morning, a Russian delegation visited the headquarters of the 8th Brigade of the Fifth Corps in the city of Bosra al-Sham, east of Daraa.

Anonymous sources told the Syria TV website that the Russian officer in charge met several 8th Brigade leaders from the Bosra al-Sham community. The Russian officer was fully briefed on the 8th Brigade’s preparedness, while also being consulted on the prospect of receiving brigade fighters at the checkpoints situated in the eastern countryside of Daraa — an area from which regime forces withdrew ten days ago.

The Russian delegation also visited the crossroads checkpoint, which connects the towns of al-Musayfirah and al-Jizah, east of Daraa. The delegation learned how the checkpoint interacted with the area’s people and promised to improve the situation in the coming period.

The Russian delegation briefed several of the area’s residents on the reasons for the attack by unidentified gunmen on these checkpoints. The delegation heard the residents’ complaints and promised further reforms in the area.

According to the source, the Russian leadership is considering the possibility of handing over most of these checkpoints in the eastern countryside of Daraa to the 8th Brigade, most of whose members are residents of the area.

On Wednesday, a patrol belonging to the Russian military police visited residents who had been displaced from their areas, in the Daraa al-Balad and Tariq al-Sad neighborhoods. The patrol also carried out surveys and statistics in order to provide them with urgent assistance.

Attacks on the regime’s security box

These events coincided with clashes that broke out at dawn on Thursday between regime forces and local fighters, in different parts of the northern and western countryside of Daraa.

Local regime fighters attacked the regime in the security compound, inside the city of Nawa, west of Daraa. Other clashes took place at the Tsil-Nawa checkpoint, without mentioning any deaths between the two sides from either side.

Young men from the northern provincial city of Jassim also attacked the cultural center, which is controlled by the State Security Branch, where clashes took place with regime forces using machine guns and rocket-propelled grenades (RPGs).

These events come at a time when many cities and towns in the governorate are witnessing a general strike, which activists called in the name of the martyr, Hamza al-Khatib. The protest denounces the ongoing siege imposed by regime forces and militias loyal to them on the neighborhoods of Daraa al-Balad, since June 24.