The Prime minister of Syria and the Speaker of the Islamic Shura Council of Iran discussed means of bolstering economic relations and trade between the two countries, according to SANA. 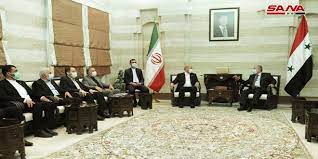 Hussein Arnous, the caretaker Prime Minister, met on Wednesday with the Speaker of the Islamic Shura Council of Iran, Mohammad Bagher Ghalibaf, and the accompanying delegation, where they emphasized the integrity of the work of the legislative and executive authorities and the role of the legislative authorities in strengthening the steadfastness of the two countries through taking measures to overcome the unjust sanctions imposed on their peoples, through the improvement of the economic relations between Iran and Syria.

The meeting dealt with opening new horizons for the economic relations between Syria and Iran, expanding joint activities, increasing trade exchange, following up the implementation of agreements signed between the two sides according to specific timetables, activating the exchange of goods and products needed by the two countries’ markets, raising the level of coordination in the domains of economic relations between Iran and Syria and overcoming the obstacles facing its development.

The authenticity of the democratic experiment was emphasized through the constitutional practices that have taken place in the two countries recently, which affirms that the free peoples who are the owners of the independent national decision, and who reject the foreign interference in their internal affairs, are the ones who decide their future and the future of their country.

Arnous expressed appreciation for the stance of Iran’s leadership, government, and people in support of the Syrian people in the face of the terrorist war, stressing the desire of the Syrian government to work to achieve a kind of integration between the economies of the two countries and its willingness to take all measures that push joint action forward at all levels, especially in the economic field to be at the level of the strategic political relations between Syria and Iran.

In turn, Ghalibaf affirmed his country’s continued support to Syria in various fields, adding that thanks to the steadfastness of the Syrian people and the sacrifices they have made, victory over terrorism was achieved.

He underlined the importance of intensifying cooperation to achieve a development in economic relations between the two countries that would rise to the level of bilateral cooperation in other fields.