The recent Russian delegation that visited Damascus, by its size and its nature, resembles the landing of a foreign power, according to al-Modon. 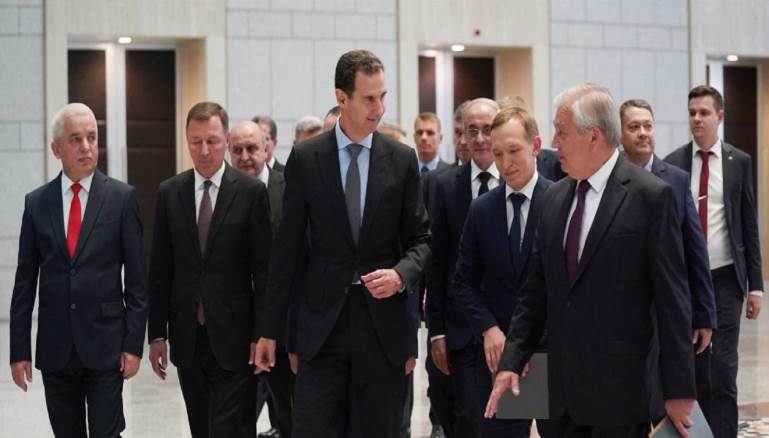 A Russian journalist, who follows regional affairs closely, responded to the delegation’s announcement and size — which includes representation for military figures — by saying: “this is a Russian landing in Syria,” as distinct from a delegation. He added that it is naïve to assume that the delegation is coming only to make progress on solving the problem of displaced Syrians; indeed, the delegation seems to have plenty of messages for Assad.

Political analyst Rami al-Shaer, who is close to the Russian government, published an article on Russia Today in Arabic, entitled: “Damascus’s slide into delusion begins with a single step.”

Shaer believes that the Syrian authorities are ignoring the fact that they cannot impose their authority in northeastern and northwestern Syria, saying that the issue does not only relate to the presence and military support of the United States or Turkey. Even after the Americans and Turks withdraw from Syrian territory, it is not guaranteed that the central authority in Damascus will be able to control these areas without a settlement based on the UN Security Council resolution, with the participation of all relevant Syrians. The same reality applies to southern Syria, which is in a “very dangerous and explosive situation at all times.”

Shaer said that Assad does not heed the path that Syria has gone down — not only because of: “allies Russia, Iran, and China but also to diplomatic and political efforts with Turkey, the ‘treacherous enemy.’ This path, through the Astana process, has resulted in a cease-fire, calm zones, and starting the work of the mini-constitutional committee, which leaders in Damascus have twisted into a platform for theoretical concepts and verbal definitions.”