New Russian general has shifted Russia's position in Deraa from mediator to punisher, according to Baladi News. 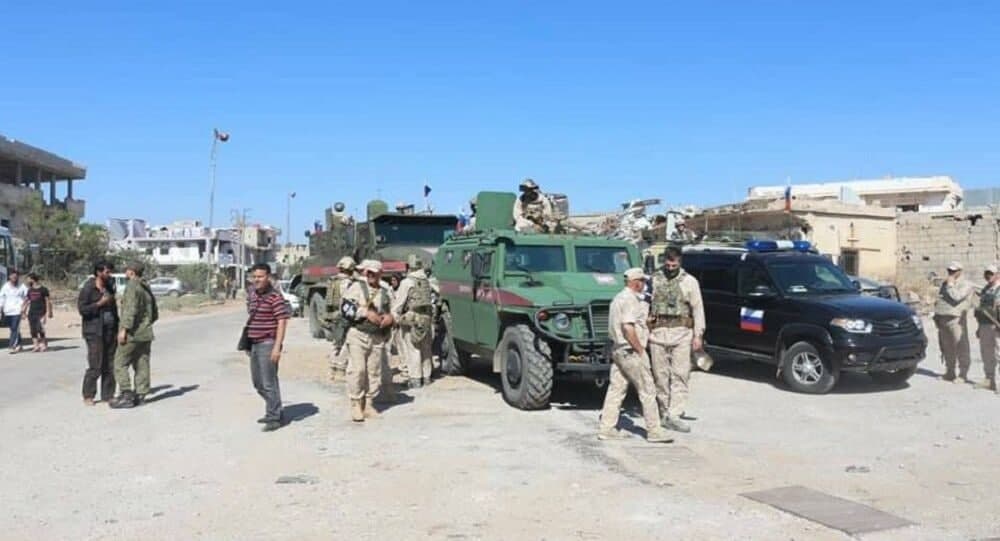 Russian forces deployed in the Daraa governorate, in southern Syria, have begun to modify their approach towards the residents and factions that have concluded a reconciliation agreement with the regime under Moscow’s auspices.

Over the past years, Russia has acted as a mediator between opposition factions and residents on the one hand, and regime forces on the other. This lasted until Russian General Assad Allah asked the Daraa al-Balad Committee to hand over the individual weapons held by the region’s residents in exchange for the retreat of local militias. His demand was immediately rejected.

The refusal of the residents to hand over their weapons caused regime forces to completely siege the area of Daraa al-Balad after the closure of the main roads leading to it, in a move described by the activists as retaliatory.

At the beginning of the siege, Russian warplanes flew at low altitudes over the area of the Daraa governorate. This move is a message to Daraa’s residents that Russia intends to carry out a military operation against them if they do not comply with its demand.

Bassel al-Ghazzawi, a Daraa journalist, told Baladi News that Russia’s request to hand over individual weapons is a punishment from the Russians to Daraa’s residents for their refusal of the presidential elections charade.

Ghazzawi added that this punishment began immediately after the end of the charade, as regime forces began imposing security restrictions on the people of the region, even without Russian intervention.

Media activist Amer al-Hourani said that what’s new in Daraa is the change in the Russian approach. The Russians have stopped being a guarantor of appeasement and became a pressure party alongside the regime after the arrival of the new Russian general Assad Allah.

Speaking to Baladi News, Hourani said that pressure will not work and that the residents of Daraa al-Balad can’t hand over their weapons. However, it is expected that the Russians will work to achieve other gains through this matter.

Brigadier General Ahmed al-Zoubi, a defector and former pilot, said that the Russian plan in Daraa was clear: to form the “8th Brigade”, to establish militias from the region working for the regime forces, and then to ignite strife and fighting between them and eliminate them all afterward.

Speaking to Baladi News, he said that the Russians have been using a policy of  “Encouragement and Intimidation” since the resumption of the regime forces’ control of Daraa. For the time being, however, they are relying on “intimidation” only.

Zoubi added that if the people accept any Russian offer in the region, it will set a precedent, and the rest of the areas will be controlled with easier offers. He stresses that rejection of Russian offers is crucial, as it is the only solution.

At the end of May, regime forces tightened their security grip on Daraa al-Balad by preventing motorcycles from entering the area, as well as closing some crossings leading to its neighborhoods.

Residents then described the measures as “punitive” as a result of their opposition to the recent presidential elections charade.

Before the start of the presidential elections charade, the majority of Daraa’s areas issued a joint statement. This statement stresses the illegitimacy of these elections and their continued insistence on the principles of the Syrian revolution, which are built on the overthrow of the Assad regime.

Representatives of the city of Busr al-Harir, located east of Daraa, rejected Russia’s request to prepare and participate in campaigns favoring the “charade”. They also prevented the establishment of any electoral center in Madd.