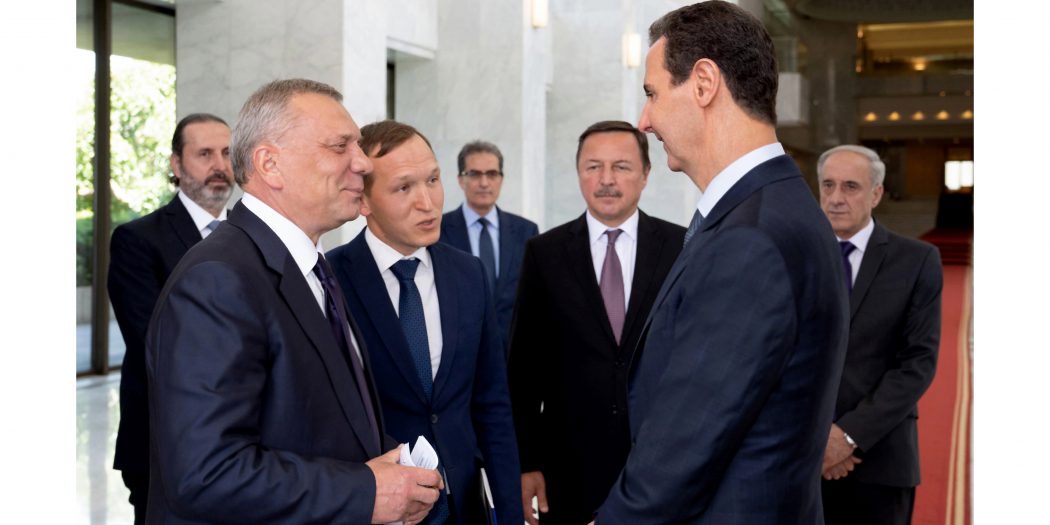 President Assad expressed his satisfaction that the two countries have reached an advanced stage of cooperation. He also expressed Syria’s interest in making Syrian-Russian joint investments a success, as they play a central role in maintaining and consolidating cooperation and mutual interests between the two friendly nations.

Assad stressed the importance of Syria continuously consulting and coordinating with its Russian ally, who helped the Syrians fight terrorism. Russian has also supported Syria politically and economically to restore security and stability, as well as to overcome the impacts of the economic terrorism imposed on the Syrian people.

Borisov pointed out that widespread popular participation in the elections confirmed the willpower and determination of the Syrian people, despite the terrorism and siege they have suffered.

The Russian official affirmed that distinguished relations exist between Syria and Russia, asserting that Russia is always ready to support Syria by any means. Russia will provide such assistance to ease burdens resulting from the unjust economic sanctions imposed on Syria, while also participating in Syria’s reconstruction.

Borisov also said that Russia will supply additional batches of the COVID-19 vaccine to Syria.

During the session, they discussed expanding cooperation, ensuring the implementation of signed agreements, completing bilateral projects, and making appropriate preparations for the 13th session of the Syrian-Russian Joint Commission for Trade, Economic, Technical, and Scientific Cooperation. The talks also discussed difficulties to bilateral cooperation and finding solutions to those challenges.

Borisov stressed that Russia continues to support Syria in all areas, especially reconstruction, rehabilitation of energy and electricity infrastructure, increasing production capacity, and pursuing all measures that can support the Syrian economy.

Prime Minister Azzam stressed that the Syrian government is working to strengthen and consolidate strategic cooperation with the Russian Federation and do everything possible to implement bilateral agreements and vital joint projects, expand economic cooperation, increase the volume of bilateral trade, and encourage mutual investment.