An Iraqi delegation discussed with ministers in Syria means of improving trade relations between the two countries, SANA reports. 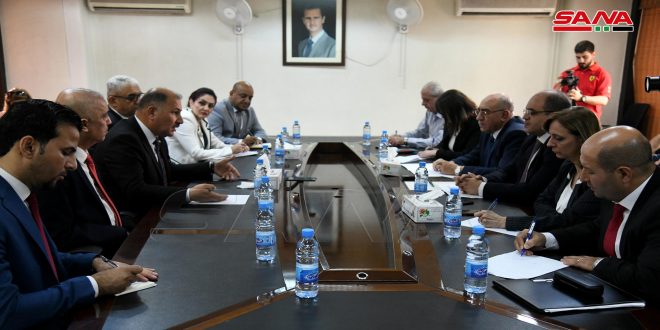 Syrian ministers and the visiting Iraqi delegation have continued discussions aimed at improving economic ties between the two countries.

Minister of Economy and Foreign Trade, Samer al-Khalil, and Iraqi Minister of Industry and Minerals, Manhal Aziz al-Khabbaz discussed how to develop trade between Syria and Iraq and overcome difficulties.

They wanted to ensure that Syrian products of all kinds reached Iraqi markets and vice versa.

For his part, the Iraqi Minister of Industry and Minerals indicated that the aim of these meetings is to create real opportunities for expanding trade and industrial cooperation. He pointed out that more details will be discussed in a manner commensurate with the legislation and laws governing the two countries to reach future economic and industrial integration between the two countries.

Minister of Transport, Zuhair Khuzaim, also discussed with the Iraqi Minister of Industry and Minerals, means of enhancing bilateral relations in the transport sector and mechanisms for developing trade between Syria and Iraq.

Khuzaim reviewed the most important developments which have been completed after the systematic sabotage caused by terrorist organizations to the transport sector, especially railways, road networks, and airports.