The city of Manbij made the headlines several times last week, as it finds itself in the midst of a feud between local and regional powers. 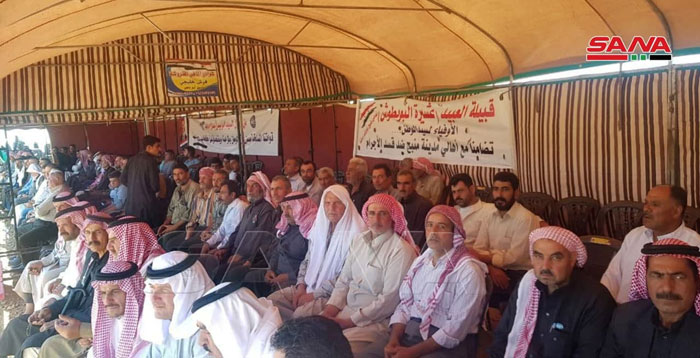 Last week, The Jerusalem Post published a story with as headline: “Is Turkey trying to provoke a new conflict in Manbij, Syria?” At least eight people were killed and scores injured on Tuesday when U.S.-backed Kurdish-led forces fired live rounds to disperse Arab tribal protests against their rule in the Syrian city of Manbij, according to security and medical sources and residents.

Manbij found itself at the center of a feud between Turkey, the Syrian government, and the Kurdish-led Syrian Democratic Forces, the de facto authority on the Arab-majority city.

Nevertheless, both the Syrian government and the Kurdish group are using Arab tribes to advocate their position

The Syrian official news agency, SANA, reports that dignitaries of Syrian clans and tribes in the province of Aleppo have affirmed their support to the local uprising in the city of Manbij against the “criminal practices of SDF militias as well as the US and Turkish occupation forces.”

Meanwhile, pro-SDF North Press reports that sheikhs and tribal notables in the countryside of Deir ez-Zor, eastern Syria, stated that Syrian intelligence cells and Turkish forces are responsible for the latest developments in the city of Manbij, which is evidence of their intention to spread chaos and damage stability in northeast Syria according to the spokesperson of the tribal notables in the city of Hajin, Salah al-Salman said.

Salman read this statement on behalf of the tribal notables of the eastern countryside of Deir ez-Zor in the meeting room of the People’s Assembly in Hajin.

Turkey, whose major goal is to weaken the Kurdish authority in North-East Syria, is highlighting the story from another angle.

The Turkish Daily Sabah reports that Germany has demanded an investigation over the recent incidents in northern Syria’s Manbij where the PKK’s Syrian branch, the YPG “terrorists” killed at least eight civilians by opening fire on protesters who opposed the terror group’s oppression.

German Foreign Minister Spokesperson Maria Adebahr told the Anadolu Agency (AA) that they do not have detailed information about the incident beyond the news reported in the press.

The Daily Sabah reminded that the “United States-backed YPG terrorists have killed at least eight civilians and injured 27 others on Monday and Tuesday as they opened fire on protestors who were demanding an end to the PKK-linked terrorist group’s oppression in the areas they occupy in northern Syria.”

Turkey’s Recep Tayyip Erdogan will meet President Joe Biden on the sidelines of the upcoming NATO summit in Brussels on June 14, the White House said. NATO leaders are scheduled to discuss future threats and burden sharing, as well as the planned withdrawal of US and NATO forces from Afghanistan.

Biden and Erdogan are expected to “discuss the full range of bilateral and regional issues”, according to the White House. Syria will definitely occupy a major share of these upcoming talks.