In areas outside regime control, but even in Daraa and Suweida there were protests against the elections held yesterday 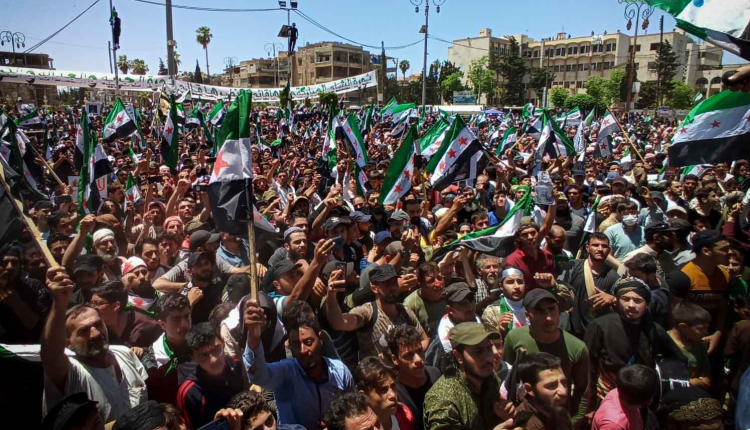 While the Syrian government conducted presidential elections without the participation of more than half of Syria’s population, in opposition-supporting regions there were various protest against the elections, describing them as a “farce.”

On Wednesday, mass demonstrations began in Idlib city against the election.

Thousands of protesters descended on the Seven Seas square in downtown Idlib. They came from cities and towns across the central and northern Idlib countryside, which are outside the control of regime forces.

The protesters deemed the elections illegal. They demanded that the “Assad regime” face prosecution for its crimes against the Syrian people.

In Idlib city, the protests’ main slogan was “No legitimacy for Assad and his elections.” Protesters carried banners bearing slogans against Assad’s rule and the elections, stressing that the Syrian revolution is continuing until “the righteous demands for freedom, justice, and dignity are met.”

On Wednesday, cities and towns in Daraa carried out strikes, which coincided with the beginning of voting in the presidential elections. There renewed calls to protest today, according to a report by the Ahrar Hauran Network.

Regime intelligence issued a decree banning motorcycles and electric vehicles from traveling in all cities and towns of Eastern Ghouta.

A Sowt al-Asima correspondent reported that regime intelligence broadcast its decision through loudspeakers in the mosques of Eastern Ghouta, along with threats to prosecute any violators of the decree.

The curfew will continue until Friday evening. Regime intelligence justified the decree on security grounds.

The decree’s issue coincided with a serious security alert directed towards members of the regime’s army and intelligence branches, who are stationed in military checkpoints on the outskirts of towns in eastern Ghouta. There, military checkpoints imposed more stringent security checks: soldiers subjected all cars to a thorough inspection, while also conducting security checks on pedestrians passing by.

The Baath Brigades militia were deployed in patrols across most neighborhoods in Eastern Ghouta. The militia also carried out sweeps across other residential neighborhoods and commercial markets.

Syrian officers who defected from the regime released a statement rejecting the presidential election.

“The regime is capitalizing on the lack of seriousness with which these international resolutions are applied, which allows the regime to continue with its charades and retain power by force. This allows the regime to re-establish its control over the remainder of Syrians and preside over the destruction of their homes.”

The statement called on the international community, along with Arab and Islamic countries, to assume their responsibilities towards the Syrian people. This would require “refusing to recognize the criminal elections, which will allow Assad to murder and displace more Syrians.”

In central Suweida, a citizen has desecrated and torn apart images of Bashar al-Assad.

The Suweida 24 website published a video showing a person tearing up all images of Bashar al-Assad hung on neighborhood walls in central Suweida. The dissident slapped the face on each image as he tore it apart. The city market’s columns and walls featured images of a lion, bearing al-Assad’s campaign slogan, “Hope in Action.”