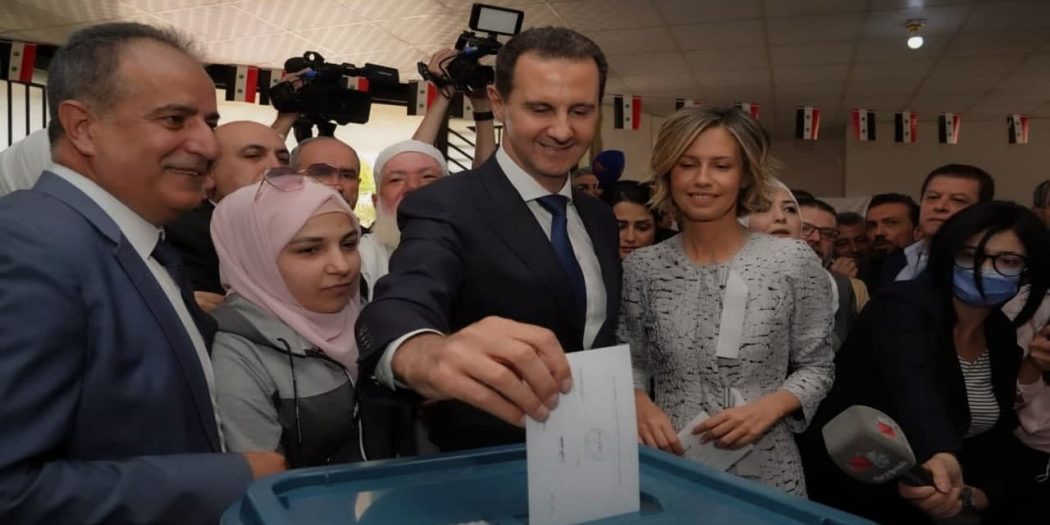 President Bashar al-Assad and his wife casted their votes at a polling station in the Municipal Council of Douma city in Damascus countryside.

Assad SAID that his visit to Douma shows that “Syria was not as they have tried to market…. a region against a region, a city against a city, sect against another or a civil war or a clash among the Syrians… the truth is not, we prove today from Douma that the Syrian people is one, in one trench against terrorism and treason.

He stressed that the popular reaction that we see is an assertion that the Syrian citizen is free , the decision of the Syrian citizen is at his own hands , not in the hands of any other party and therefore all the statements we hear recently from Western countries, most of them with a colonial history that began before the campaign and continued until the past few days and perhaps the last few hours that comment on these elections and give an evaluation of them, determine their legitimacy and illegitimacy. “Of course, we, as a state, do not give interest to such statements, but the most important thing of what the state says or doesn’t say is what the people say,” he said.

He added, “I think that the popular interaction that we have seen during the past weeks was a clear and efficient response to all those… and this reaction tell them that the value of your opinions is zero.”

He concluded his speech by saying” I send greetings to all the citizens of Douma, to all citizens of Ghouta and to all citizens of the liberated areas, and certainly with each other and together we will work and build our cities, villages and towns, and we will restore to our fields their splendor and fragrance… we send greetings to all the Syrian Arab people everywhere inside and outside the homeland in Syria and in the diaspora because they are the only ones who have the great role in every achievement and no matter how small and no matter how great, because they are the ones who sacrificed and withstood.”

Judicial subcommittees in different provinces have started their work since half past six in the morning, and the ballot boxes were opened to candidates’ agents and the mass media to make sure that they were empty, then they were closed, and the election process started at 07:00 a.m.

Member of the Higher Judicial Committee for Elections Mukhles Qaisiya told SANA that since the first minutes of opening the polling stations in the provinces and the start of the election process, we noticed a large turnout by citizens to participate in this constitutional entitlement, which shows the love of the Syrians for their homeland and their insistence on participating in building the future of Syria.

The Higher Judicial Committee for Presidential Election said that the ballot boxes in a number of polling stations were completely filled after less than four hours after starting the election process due to the large turnout by the voters.

The Higher Judicial Committee for Elections announced Wednesday that it follows up the proceeding of the elections process throughout Syria and it is in an immediate contact with the sub- judicial committees in all Syrian provinces to make sure that no obstacles or problems existr.

In a statement, the Committee stressed that it has instructed the sub-judicial committees that any party is not permitted to interfere in the elections process under legal accountability, pointing out that there is no observer on the elections except the judicial authority based of the provisions of the Constitution and the General Elections Law no. 5 for the year 2014.

Information Minister Imad Sarah said in a statement to reporters at the Media Center at the Ministry of Information that the large number of Syrians casting their votes in the ballot boxes bears many national and political meanings and connotations, adding that “the citizens said their word with the failure of attempts to influence their will and convictions, such as attempts to intimidate, mislead and starve them through terrorism or through the coercive economic measures and the so-called Caesar Act imposed on them.”

Sara noted that the number of reporters who are in Syria to report on the elections reached 125 from many countries, including the United States, Russia, Iran, Egypt, Iraq, Lebanon, Denmark, and Austria, in addition to the correspondents in Syria who have been accredited by the Information Ministry.

The Information Minister stressed that the ministry provided all logistical services to the media center to facilitate the work of Arab and foreign journalists, and their movement was facilitated, indicating that what is required only from these correspondents is professionalism, credibility, and conveying the true image as it is conveyed by the national media.