Prime Minister Hussein Arnous has held a meeting with the Damascus Countryside Chamber of Commerce to discuss economic and industrial issues, and means to support production writes Al-Watan. 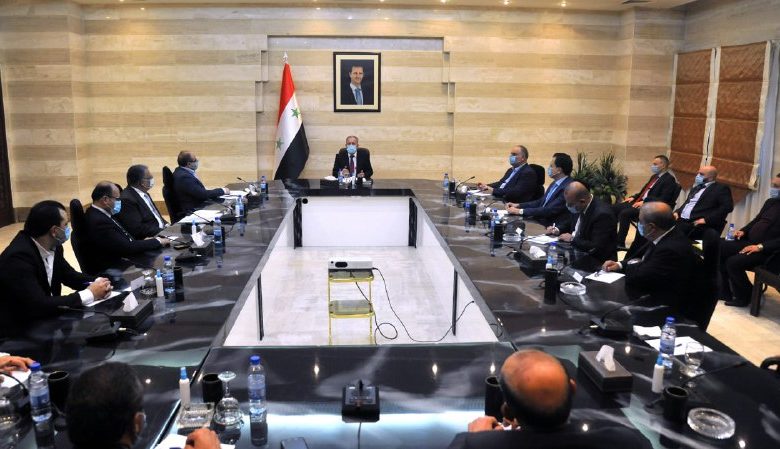 On Sunday, Prime Minister Hussein Arnous stressed the necessity of mobilizing the issue of social responsibility in various economic and commercial activities as well as launching initiatives that would regulate prices, fight monopoly and smuggling, support the national economy, and revive production.

During his meeting with the Board of Directors of the Damascus Countryside Chamber of Commerce, Arnous explained that at the current stage, the partnership between the government team and the unions should be strengthened, the available energies and capabilities should be invested in, and the pace of coordination and concerted efforts to reach common goals should be increased. Most importantly, the citizen’s interests, and reducing their suffering as a result of the unjust economic blockade, should be prioritized, and the provision of reasonably priced basic goods should be ensured.

Arnous said, “The government believes in partnerships with various federations, bodies, and chambers and provides support and facilities for it to be able to play the role entrusted to it, which must be directly linked to the needs of society,” stressing the importance of harnessing all capabilities in a way that serves the development and production process and contributes to improving the economic and living situation.

Arnous touched on the government’s keenness to address the problems and difficulties faced by the commercial sector in order to increase its competitiveness and target new export markets by strengthening trade exchange with friendly countries and working to overcome obstacles in the face of the flow of Syrian goods to foreign markets.

The proposals that were discussed focused on supporting the export of agricultural products, a staple of the Damascus countryside, conducting awareness campaigns for farmers to help them improve the quality of their products, adopting more qualitative regulations and standards to raise the competitive advantage of Syrian products, encouraging trade agreements with friendly countries, and supporting industrial zones and cities.

The meeting was attended by the ministers of economy, domestic trade, consumer protection, agriculture, and agrarian reform.