The Syrian National Coalition has met with activists and union and discussed the ongoing situation in northern Syria and efforts to end the suffering of the Syrian people. 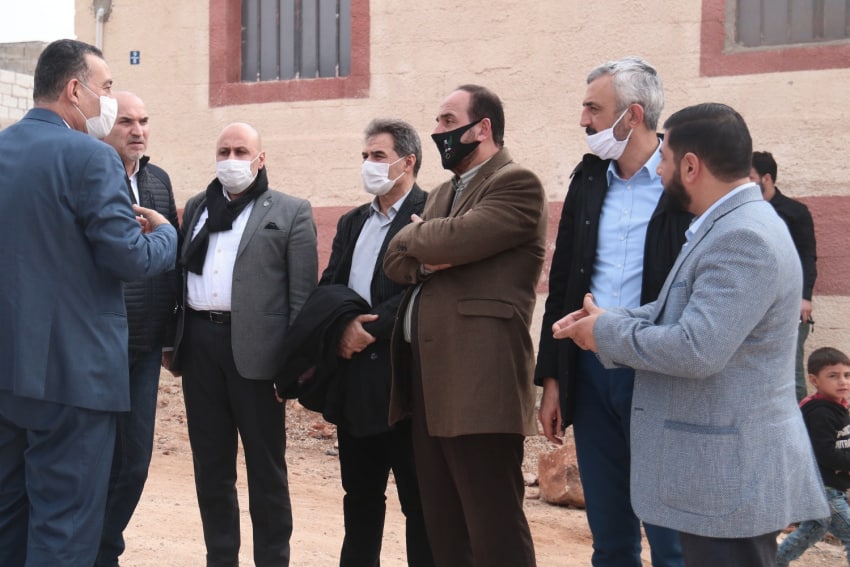 The head of the National Coalition for Syrian Revolution and Opposition Forces, Nasr al-Hariri, said on Thursday that the opposition has a negotiation delegation that adheres to the principles of the revolution and looks forward to the success of the political solution, adding that the regime is still obstructing every effort or move aimed at ending the suffering of the Syrians.

During a dialogue with activists and unions in northwest Syria, Hariri indicated that the regime has aborted all international and regional attempts, in partnership with Russia and Iran, which support an international resolution, on the one hand, and efforts to stop the lethal weapon that has killed and is still killing Syrians, on the other.

“The regime does not understand diplomacy and politics, but rather bases its dealings off the philosophy of the gang that aspires to build wealth and power through criminality,” Hariri said in a speech he delivered to the local councils, tribes, trade unions, doctors, and representatives of the National Army. “This is what was made apparent through people’s need for bread, fuel, and the various necessities of life, while Assad and his relatives live disconnected from reality, monopolizing their position as rulers.”

Regarding the areas under the control of the opposition factions in northern Syria, Hariri said, “It is necessary to highlight the method of rational government and to secure the needs of the Syrians in northwestern Syria, which has a population of millions.”

The Syrian National Coalition, headed by Hariri, held a meeting with a Peace and Freedom Front delegation, which includes the Kurdish National Council, the Assyrian Democratic Organization, the Syria’s Tomorrow Movement, and the Arab Council in Euphrates and al-Jazeera.

The meeting focused on the importance of the eastern Euphrates region and the need to let its people manage it. The field and living conditions of the area were also discussed.

Hariri stressed his rejection of all extensions of foreign terrorist organizations and their branches inside Syria. He said on the topic, “It is absolutely impossible to accept any foreign militias on all Syrian lands, whether they are leaders or elements,” and stressed that this clear vision is the basis of any national dialogue process.

For its part, the Peace and Freedom Front delegation emphasized that the unity of the Syrian territories comes at the forefront of its political vision, which states that it is a basic principle that meets the demands of the Syrian people to achieve freedom, dignity, justice, and democracy, reminding all that the Front’s documents summarize the spirit, ideas, and principles of the propositions approved by the frameworks adopted by the Syrian revolution and opposition.

The delegation emphasized that the components of the front are an essential part of the official institutions of the Syrian opposition from the Syrian National Coalition, and the Syrian negotiating body, which has the same aspirations to reach a political solution in accordance with international resolutions, chief among which is the Geneva Declaration and Security Council Resolution 2254.

Hariri held a virtual meeting with the French Special Envoy for Syria, François Sénémaud, and discussed with him the latest developments and Syrian politics.

Hariri spoke about the increase in the number of cases of the coronavirus in the liberated areas and warned of the dangers of the virus reaching the camps, which number more than 1,160, including 400 camps that do not receive aid regularly and are in urgent need of support and assistance.

The two sides reviewed the developments of the political process and the military situation, and Hariri stressed that the regime and its supporters are intentionally trying to thwart the ceasefire agreement signed last March, through the escalation of military operations and the repeated aerial bombardment of the liberated areas.

For his part, Sénémaud affirmed his country’s continued support for the National Coalition and the rights of the Syrian people to freedom, dignity, and democracy. He stressed the importance of continued communication, cooperation, and coordination to achieve common interests.