The regime has been stopped from searching for wanted people in Daraa al-Balad, following clashed with former FSA members reports Enab Baladi. 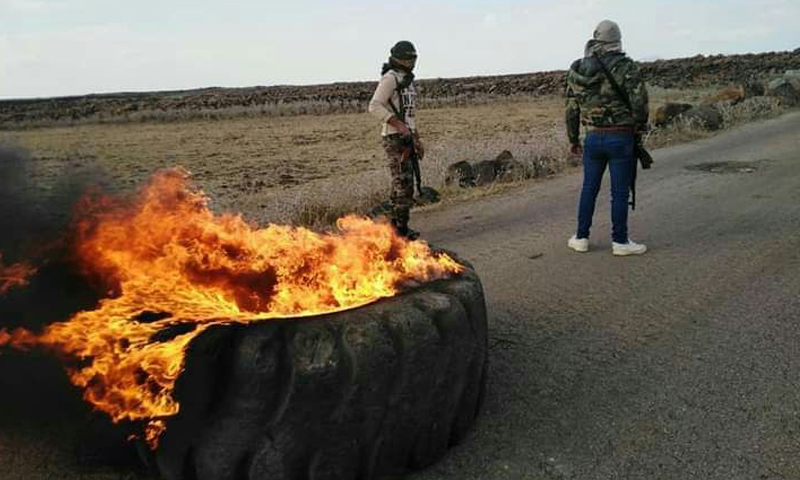 Former Free Syrian Army (FSA) fighters intercepted an operation carried out by the regime forces on Sunday morning in neighborhoods of the Daraa al-Balad region in the center of Daraa Governorate, southern Syria, which was searching for wanted persons, according to local networks.

Enab Baladi’s correspondent in Daraa reported that the al-Ghaith Forces of the regime forces’ Fourth Division, accompanied by local factions of the Military Security, combed the Shiyah and Nakhla neighborhoods, which are agricultural areas close to the Jordanian border.

The forces clashed with former FSA members during the convoy’s attempt to advance towards the al-Sadd Road neighborhood in Daraa al-Balad, after which the regime bombed Daraa al-Balad with three mortar shells.

The local Nabaa Syria website said that military forces supported by vehicles and medium machine guns entered the Shayah and Nakhle regions this morning, and clashes took place east of Daraa al-Balad between local fighters and the regime forces.

The Fourth Division, the 15th Division, and local militias affiliated with the Military Security had mobilized their members since yesterday evening.

On Saturday, the Central Committees in Daraa issued a statement that included stopping the meetings and communication with the Fourth Division and holding it responsible for any lives lost and any property destroyed, in addition to an immediate request that the Russian guarantor to assume their responsibility for what is happening.

The Central Committees called for demonstrations to condemn this act, which “terrorizes the people and jeopardizes their livelihood.”

A number of residents blocked the main roads in the cities, towns, and villages of Tafas, al-Yadudah, al-Muzayrib, and the residences of Jalin and Tel Shihab in the Daraa countryside, in protest of the regime forces’ raiding of the neighborhoods of Daraa al-Balad.

On Sept. 20, 2020, a military group affiliated with leader Mustafa al-Masalmeh, known as al-Kasim, targeted al-Arbaeen neighborhood in the Daraa al-Balad region  with medium weapons and counter attacks after the killing of one of its members.