The regime has continued to withdraw from Ayn Issa, moving 37 military vehicles over the weekend, as the SDF construct fortifications in the area reports Baladi News. 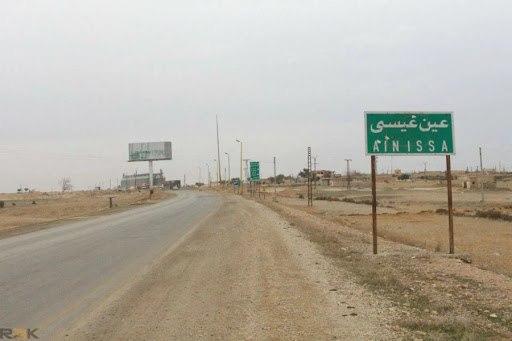 During the past few years, the Syrian regime has been withdrawing its forces from Ayn Issa in the northern countryside of Raqqa, for reasons that remain unknown.

According to local sources, on Sunday, the regime forces withdrew about 37 military vehicles from Ayn Issa.

Sources stated that four military columns from the regime’s forces withdrew from their positions in Ayn Issa district during the past few days and headed to the city of al-Tabqah and the Russian Tel al-Saman military base in the Raqqa countryside.

According to the sources, the regime forces kept a limited number of their members in Ayn Issa, in addition to Russian military police, who are also present in the region.

Ayn Issa is home to regime forces bases and a base for the Russian forces, which entered the town following understandings with the Syrian Democratic Forces (SDF) on one side and Turkey on the other last year, which put an end to Turkey’s Operation Peace Spring.

Journalist Ibrahim al-Habash, head of the Al-Khabour website, said that the withdrawal of the regime forces was preceded by the SDF’s recruitment of dozens of young men from the camps located in the countryside of Raqqa, in order to accelerate and complete the process of digging tunnels and trenches in the vicinity of Ayn Issa.

Speaking to Baladi News, Habash said that the process of expediting the digging of fortifications, which includes digging tunnels, trenches, and raising mounds around the town of Ayn Issa, came after the SDF bases were exposed, during the past few days, to shelling by the Syrian National Army and the Turkish Army. He explained that the bombing came within the framework of the response from the Syrian National Army and the Turkish Army to the repeated infiltration attempts by the SDF and the bombing of Operation Peace Spring villages, which resulted in the displacement of some.

Habash stressed that the withdrawal of the regime forces from the area is linked to a resolute response to the National and Turkish Armies’ provoking of the SDF, which the regime and the Russians wash their hands of. It does not seem that they are committed to stopping [the provocations] as the Russians pledged upon the end of Operation Peace Spring.

He pointed out that, by withdrawing, the regime is sending a message to the SDF, that it may withdraw from the region and completely abandon the agreement that the Russians had with the Turks, because it is not ready to lose a military confrontation in the region.

Habash said, according to anonymous sources, that there is information indicating that the Russians had asked the SDF to hand over Ayn Issa to the regime forces completely in light of the recent developments in the region. SDF refused and instead increased military fortifications therein, which prompted the regime to reduce its presence and float the idea of a complete withdrawal.