The People's Assembly have met to discuss upcoming projects and emphasised the need to the Syrian people and the homeland writes SANA. 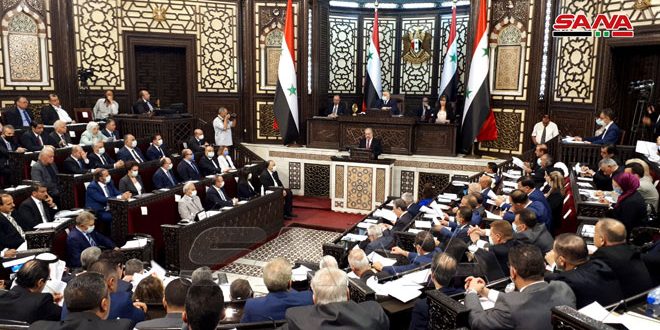 On Sunday, the People’s Assembly held its first session of the 1st Ordinary Round of the 3rd Legislative Term chaired by Speaker Hammouda Sabbagh, to discuss the ministerial statement of the government which includes the agenda of the upcoming phase, in presence of Prime Minister Hussein Arnous and Cabinet Members.

At the beginning of the session, the Assembly referred a number of draft projects to the specialized committees to study them and prepare necessary reports regarding them.

Sabbagh stressed in a speech at the Assembly, that they and the cabinet will work together to serve the people and the homeland.

Sabbagh pointed out that Syria has successfully passed a significant stage in facing the powers of evil, hostility and terrorism and all kinds of economic, media, psychological and diplomatic wars, which are in continually escalating, particularly following the large victories achieved by the Syrian Arab Army against terrorism.

Sabbagh saluted the Syrian Arab Army, the souls of its brave martyrs and courageous wounded, as well as the resilient Syrian people who are rallying around their army and leader.

Sabbagh concluded his speech by stressing the need to adhere to the approach that President Bashar al-Assad has talked about in his speeches in front of members of the People’s Assembly and members of the cabinet in dealing with the tasks and challenges, on top of them possessing the means and the ability to meet needs of the people in best possible and available ways in light of the pressures and siege Syria is facing.