The continued control exerted by Turkey backed forces over the Alouk water plant has pushed the Syrian government to provide water trucks for the locals of Hassakeh writes SANA. 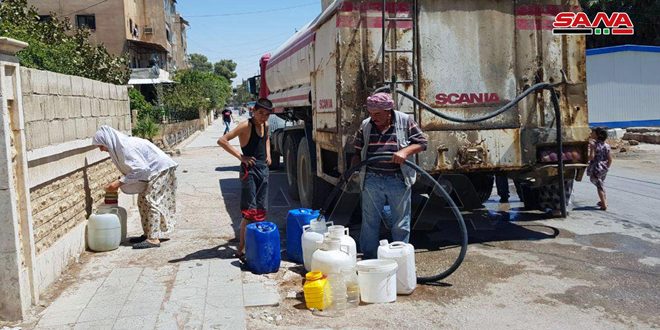 Hassakeh City Council has secured water trucks to transport drinking water to the city center, since the Turkish occupation forces and their mercenaries have continued to cut off the water to the housing compounds along the water transfer pipeline, which extends from Alouk plant to Hassakeh city and its surroundings.

The head of Hassakeh City Council, Eng. Adnan Khajou, in a statement to SANA, said that the Council has allocated trucks to transport 8,000 cubic meters of drinking water daily to the neighborhoods of Hassakeh city after filling them with water from the Naffasheh wells, east of the city.

In the same context, the Water Project at the Syrian Arab Red Crescent- Hassakeh Branch, fills the tanks which have been installed on the streets of Hassakeh to contribute to alleviating the suffering of the locals in the current period.

In a similar statement coordinator of the project Nora Abdul-Wahab said that work is currently focusing on transferring water in trucks to fill 58 water tanks, and whose capacity is five cubic meters, and have been installed on the streets of the city earlier with the aim of securing drinking water for the locals in the city, and that 30 additional tanks are expected to be installed over the coming period according to the need.

Meanwhile, the locals in Hassakeh city called for an end to the violations of the Turkish occupation and its terrorist mercenaries and stopping them from controlling Alouk plant, which is considered the main source of drinking water for about a million people.