Coronavirus continues its spread across Syria, with many more cases announced and institutions urging people to take precautions, which are not always being heeded. 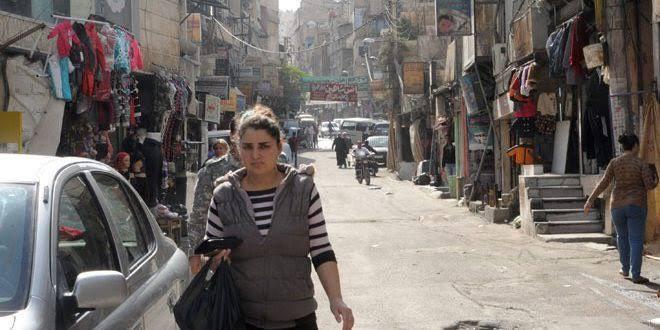 On Thursday, the Syrian Ministry of Health announced that 75 new coronavirus cases were recorded in the country while 10 others have recovered. The ministry said in a statement to SANA that the total number of infections in the country is now 1,402, of which 395 cases have recovered and 53 have passed away.

Over the past two days, the cities and towns of rural Damascus have recorded 18 deaths in the city of al-Tal and the towns of Jdaydet Artooz and Kanaker in the western countryside of Damascus.

A source in Jdaydet Artooz told Sowt Al-Asima that 14 deaths have been recorded in the town since the beginning of this week, including three townspeople and 11 displaced people, all of whom have died.

The source added that none of the deceased were taken to hospitals. Instead, they were quarantined at home as soon as they started exhibiting symptoms and until their death.

The Sowt Al-Asima website said that the Damascus Countryside Health Directorate conducted random PCR tests in the city, which revealed that 50 of its children were infected with the virus.

The correspondent indicated that the Ministry of Health asked the sick to adhere to home quarantine, stressing that it had transferred two of them to al-Qatifah Hospital, after their health started deteriorating.

The virus has been spreading like wildfire in the city as of late, to the point that mosques called on citizens to remain homes and to refrain from going out unless absolutely necessary.

In northern Syria, the city of Raqqa has reported overcrowding at the al-Naim Roundabout and al-Rasheed Park in the city center, amid a state of indifference to the outbreak of the coronavirus.

Media activist and Raqqa resident, Ahmed al-Hussein, told SY 24 that “al-Naim Roundabout is one of the most crowded areas, and despite the security teams trying to disperse people, they ended up returning to gather again, once the security patrols left.”

Hussein explained that “al-Naim Roundabout and al-Rasheed Park are one of the most popular places for people to spend time, as they considered them a special outlet where they can hang out, especially since the rest of the places and markets are all destroyed.”

In response to a question regarding warnings about the seriousness of the consequences of this indifference, Hussein said, “The concerned authorities are not handling the situation seriously, in addition to the fact that the majority of the population perceives the virus as a mere lie. People have been asking the authorities to reveal the names of the infected so they can have proof of the existence of the coronavirus.”

Hussein pointed out that, “wearing the face mask has become a fashion statement. Most people wear it, but for the wrong reasons, mainly because it is enforced. Add to that the fact that it is now being sold in different shapes and colors.”