The coronavirus spread is wreaking havoc in Damascus, as it spreads through hospitals claiming the lives of a number of doctors, as well as civilians. 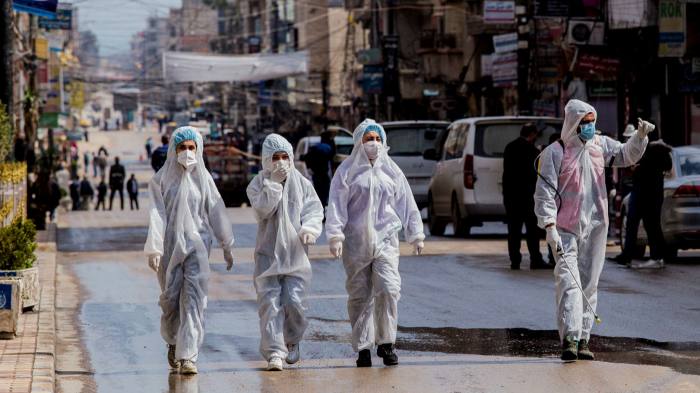 The coronavirus has claimed the lives of a large number of Syrian doctors inside and outside Syria, doctors who have worked tirelessly since the outbreak of the virus and have been on the frontlines, helping to treat the sick.

Opposition news website, Baladi News, reported that overt the past 30 days, hospitals in Damascus and its countryside lost more than 30 doctors, the last of whom was the doctor and holder of the title Professor of Urology at the Dar al-Shifa Hospital, Duraid Yaziji. Just the day before Dr. Muhammad Ziyad Khamis, the brother of former prime minister Imad Khamis, who had rescued and treated dozens of people in eastern Ghouta, died.

Over the past two days, the city of al-Raheeba in the eastern Qalamoun, in the Damascus countryside, recorded 22 coronavirus cases.

The local Sowt Al-Asima website wrote on Sunday that 19 people from Douma city in Ghouta have died of the coronavirus since the beginning of August.

According to Sowt Al-Asima, most of the dead were elderly and residents of Khorshid, al-Quwatli and the Tayseer Taha neighborhoods, in the city center.

The site confirmed that the burial of all the deceased took place under the direct supervision of medical units of the Syrian Red Crescent Organization, and in the presence of a limited number of the deceased’s next of kin.

In the opposition areas, more than a million displaced Syrians living in camps in northern Syria are under threat, after two cases were confirmed in one of the camps in the northern countryside of Aleppo, on Sunday.

According to Alsouria Net, the Ministry of Health in the Syrian Interim Government announced yesterday that two new cases were recorded, for the first time in the Bab al-Salama camps in the northern countryside of Aleppo, bringing the total number of infections to 45.

According to the ministry, there were not any new recoveries, keeping the total number of recoveries at 29.

In recent days, humanitarian and medical organizations have warned of the arrival of the coronavirus in the northern Syrian camps, especially with the absence of any possibility to implement social distancing and quarantine measures.

The Response Coordinators in northern Syria said in a statement “The camps have entered a dangerous phase.”

The regions of northern Syria lack the components of a sturdy medical system that is capable of responding to pandemics and diseases, as a result of the lack of support provided to them, and the bombing they were subjected to over the past years and months, which led a large number of hospitals and medical centers to ceaseing operations.

The centers approved by the regime government to carry out PCR tests are witnessing an unprecedented influx of patients, amid an apparent absence of supervision by the concerned authorities, which has been contributing to the spread of the virus instead of preventing it.

The SY 24 correspondent in Damascus said that one of the approved centers responsible for testing travellers is witnessing overcrowding, so is the al-Mazzeh area in Damascus, especially since each traveler has to visit the center several times to receive clearance to travel.

Syrian actor Ahmed Rafi, known for his strong loyalty to the regime, commented on the situation in the Syrian hospitals that are teeming with patients, describing what is happening as “catastrophic.”

Rafi, who is receiving treatment for the coronavirus, and according to pro-regime sources, stated that, “Conditions in Syrian hospitals are catastrophic due to patients’ negligence and the medical staff’s fear of giving them treatment as well as the lack of medical equipment and medication, let alone the huge number of infections.”

Rafi continued, “Patients in emergency units and hospitals are laying on the ground.”

He pointed out that, “the health situation at al-Assad University Hospital is very poor, and the number of infections is in the thousands, with dozens of deaths daily, as there is no oxygen available in the hospital. Most are fighting death without oxygen or any medical attention.”

He confirmed that he “personally witnessed the death of 60 people in one day,” noting that, “people have been bringing patients in and leaving their phone number, asking the medical staff to call them when the patient dies.”