During their meeting, the two sides discussed on-going developments in the country and preparations for the upcoming round of the Constitutional Committee writes SANA. 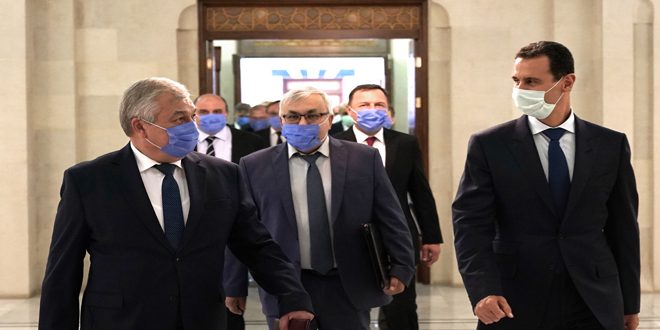 Lavrentiev conveyed to Assad the congratulations of President Putin on the success of the recent elections of the Syrian People’s Assembly, which confirms the support of the Syrian people to the state’s approach to achieving stability and improving living conditions in the country.

During the meeting, the parties discussed developments of the situation in Syria, where it was stressed that the continuation of some aggressive political and economic policies, and their continued interference in Syrian affairs is the main factor in the protracted presence of terrorist organizations in some Syrian regions, and the resulting undermining of stability and the prevalence of dangers that threaten the lives and livelihood of Syrians.

On the agenda were the ongoing preparations for holding a meeting of the Constitutional Committee in Geneva next month as well as the need for various international parties to work on providing the appropriate atmosphere for the committee to carry out its work, according to the principle upon which it was formed – namely under the leadership of Syria and without any external pressure to influence its work.

The two sides affirmed their determination to continue and intensify joint work, follow up on the development of bilateral relations, make efforts to find solutions to the difficulties resulting from the policies adopted by some Western countries against Syria, mitigate the effects of unjust sanctions imposed on the Syrian people, and assist the Syrian people in facing the consequences of these sanctions, including addressing the coronavirus pandemic.

In attendance were Maj. Gen. Ali Mamlouk, head of the National Security Office, Dr. Ayman Sosan, Deputy Minister for Foreign Affairs and Emigrants, Luna al-Shibl, the Syrian Presidency’s Director of the Political and Information Office, and the Russian Ambassador to Damascus.