Coronavirus is spreading across Syria, with more infections and deaths recorded in multiple locations, amid reports of a shortage of supplies to test, prevent and treat the virus. 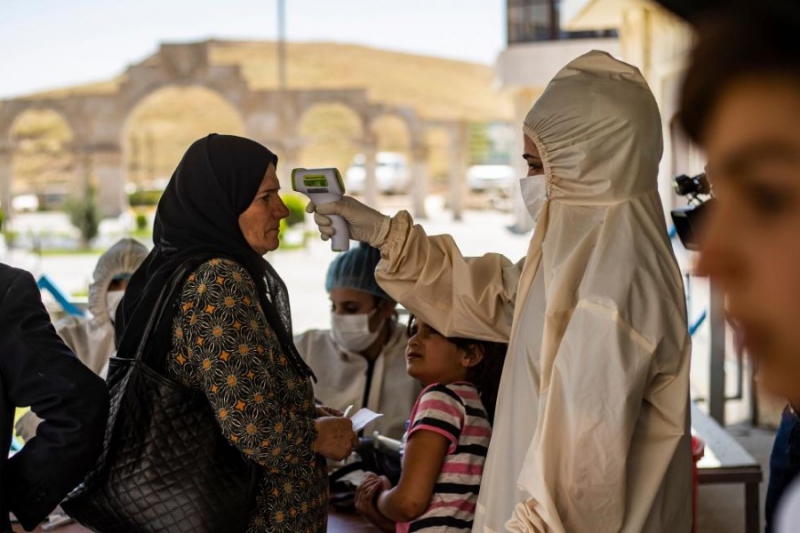 Today, the Ministry of Health confirmed 23 new coronavirus cases in Syria, nine recovering cases, and three deaths. The ministry said in a statement, which SANA acquired a copy of, that the number of infections recorded has reached 584 so far, of which 174 have recovered and 35 died.

Informed sources revealed to the Aliqtisadi website, affiliated with the Ministry of Higher Education and Scientific Research, that a decision was issued to stop surgical procedures and the admission of cold cases in university hospitals to prevent overcrowding. According to the decision, only emergency cases suspected of being infected with the coronavirus are to be admitted. The ministry also informed university hospitals to prepare isolation rooms and secure oxygen.

Moreover, the government issued a decision to stop all weddings and close all wedding venues as of Friday, after the rapid spread of the virus in Syrian cities and towns.

For its part, the Ministry of Endowments issued a decision to suspend Eid al-Adha prayers in the governorate of Damascus and the Damascus countryside, given the marked increase in the number of new infections, according to SANA.

In Damascus, Shaam News mentioned that Muhammad Osama Rajeh, the son of Sheikh Karim Rajeh – one of the most prominent clerics in Syria – has died in Damascus of the novel coronavirus, according to a Facebook post published on Sheikh Karim Rajeh’s page.

The post mentioned that Rajeh died after being infected with the coronavirus. Furthermore, he was transferred to the al-Mujtahid Hospital where he “spent hours battling illness, before he met his fate.”

Activists pointed out that Rajeh had experienced “deliberate” medical negligence by the medical staff prior to his death, accusing the staff of intentionally not placing him on a ventilator, as the hospital had reached full capacity, in addition to their inability to transfer him to another hospital as private facilities were not receiving COVID-19 cases.

COVID-19 cases are increasing in Aleppo, according to pro-regime pages. The Hay al-Zahra’ News Network said that there are dozens of unannounced infections in Aleppo, and that some hospitals are already full. According to the website, when patients come to the hospital showing coronavirus symptoms they are not being admitted but rather they are being asked to self-quarantine.

In the Jaramana suburb of the Damascus countryside, a local page that covers Jaramana news revealed that 15 new cases were reported, and that the Rural Damascus Health Directorate moved them all to quarantine centers.

Over the past two days, four residents of the towns of Bella and Beit Sahm, south of the capital Damascus, died, according to Sowt al-Asima. Sixty men have already passed away in the town due to the pandemic.

Baladi News reported that the Ministry of Health imposed on travelers exiting Syria, through The Rafik Hariri International Airport, to do a PCR test, which costs 100 dollars, according to the Central Bank of Syria pricing.

According to the decision, any Syrian or non-Syrian citizen who wants to leave Syria has to pay a 100 dollar fee, and to exchange the same amount into the Syrian pound when entering Syria via the official border crossings at the official rate set by the Central Bank of Syria, according to a previous decision from the regime’s government.

In self-administered areas, it was announced that four new cases had been recorded — three of which were in the city of Qamishli and one case in the northeastern province of Hassakeh. Media outlets close to the Syrian Democratic Forces (SDF) shared statements issued by the Crisis Cell to Confront Corona, through which they announced new cases, according to what was reported.

The Health Authority, affiliated with the self-administered areas, held a press conference in which it announced the test results of previously inconclusive cases that ended up testing positive.