Reports have circulated that suggest the coronavirus is spreading in Syria and that there is insufficient supplies to test and prevent the virus. 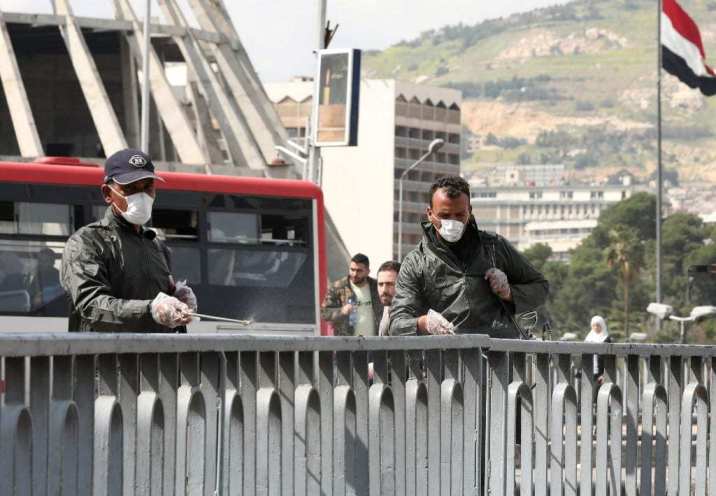 Those who have been following developments of the situation in Damascus find the news  regarding the coronavirus worrying. Both pro and opposition Syrian media reported inconsistent figures.

The government’s official news agency, SANA, reported that the Health Ministry announced on Monday 26 new coronavirus cases, all of whom were in close contact with carriers. Ten patients have recovered while four others have passed away. The Ministry said in a statement that the total number of documented cases in Syria has reached 522, of which 154 have recovered while 29 have passed away.

Officials blamed “the negligence of the citizens”, such as Co-Director of Communicable and Chronic Diseases, Dr. Atef al-Taweel, who criticized, “some people’s negligence, who will not realize the gravity of the situation except when one of them catches the virus and needs a ventilator or to be admitted to the hospital,” as he put it.

The Syrian Doctors Syndicate expressed sadness over the passing of Dr. Ghassan al-Takleh from the virus. Takleh was working in intensive care at Ibn al-Nafees Hospital in Damascus. This came after pro-regime pages disclosed the death of a doctor who worked with the Red Crescent in regime-controlled areas.

The Sowt al-Asima website quoted sources saying that the coronavirus had recently spread in the Damascene neighborhood of al-Midan and that the cause of the rapid spread is due to several factors — including the fact that the neighborhood is home to a large number of hospitals and medical centers and, knowing how small it is, it is vulnerable to infections.

Private sources revealed to Sowt al-Asima that Damascus is running low on PCR swabs, necessary to detect coronavirus infections, in addition to there being a severe shortage of preventative measures and face masks, coinciding with the lack of oxygen that government hospitals are suffering from.

The sources added that the medical conditions at the Ibn al-Nafees Hospital are very poor, and that precautionary measures are almost non-existent, despite the presence of a large number of patients who have the coronavirus in the hospital.

One of the doctors working at the hospital told Sowt al-Asima that all doctors in the hospital take turns to wear the one available protective suit during their examinations, stressing that the suit is not being sterilized before or after use.

The doctor pointed out that the hospital is suffering from a shortage of face masks as well, indicating that some nurses are choosing which doctors to give masks to, which prompted many doctors to buy masks at their own expense.

Another doctor working in government hospitals in Damascus said in a voice message circulated by residents of the capital that the spread of the virus in Damascus and its countryside is on the rise, but it has not reached an explosive state yet, stressing that the hospitals do not have the ability to conduct PCR tests for everyone.

The doctor pointed out that the symptoms of the virus differ from one country to another, stressing that symptoms in Syria come in the form of fever, joint and muscle pain, or digestive problems.

According to reporting by Baladi News, local sources revealed that new infections had been recorded in the city of Arbin in eastern Ghouta in the Damascus countryside, including in two prominent doctors and a religious leader.

The sources said that the city of Arbin in eastern Ghouta alone recorded about 15 new infections, while the regime’s media kept the spread of the virus under wraps in the areas it controls.

Last week it was announced that five clerics had died in Damascus, in addition to a young cleric who died in Aleppo, and another who died about two weeks ago. Rumors are circulating that they were killed by the coronavirus.

However, the Ministry of Endowments, affiliated with the regime, denied the claims, saying that, “the deaths were caused by other ailments, such as heart disease in addition to old age.”