Walid al-Muallem has condemned the recent sanctions imposed on Syria by the US and has called on Syrians to use this opportunity to pull the country from its economic slump writes SANA. 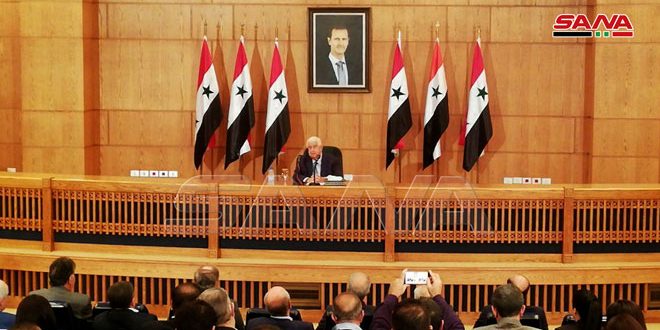 Deputy Prime Minister and Foreign and Expatriates Minister Walid al-Muallem has said that the real goal behind the so-called “Caesar Act” is to open the door for terrorism to return Syria to 2011 and to force Syria to give up its alliance with the resistance and accept normalization with Israel.

In a press conference on Tuesday, Muallem said that the statements made by Mike Pompeo and James Jeffery about the so-called “Caesar Act” prove that they are all liars because if they worked for the good of the Syrian people they wouldn’t conspire against their livelihoods.

He stressed that there are no exceptions in the so-called “Caesar Act” and that the Americans are lying when they claim that this Act doesn’t include medical supplies and food.

The Deputy Prime Minister said that the Syrian people are used to dealing with unilateral sanctions, which have been imposed on them since 1978.

He added that the act should be turned into an opportunity for the Syrian people to perk up their economy, achieve self-sufficiency and deepen cooperation with friends and allies in all domains, underlining that Syria’s war on terrorism will not stop.

Muallem wondered if the presence of US forces around Syrian oil fields, the burning of wheat fields and the US threat to friendly countries that want to contribute to reconstructing Syria serve the interests of the Syrian people.

He said that the US occupation forces are investing in terrorism and this was proved by the transporting of Islamic State leaders by helicopter to Iraq and the support given to Jabhat al-Nusra and the Turkish regime in their aggression on Syria.

He said that the US defends Israeli interests and its withdrawal from the region is inevitable.

Muallem added that Turkey occupies Syrian territories and the lessons of history have shown that the people who struggle for the sake of their freedom and sovereignty will win in the end.

On the political track, Muallem affirmed Syria’s commitment to the process of finding a political solution to the crisis in the country and its rejection of any American or non-American foreign interference in the work of the Constitution Committee, which must be a Syrian-led process away from any foreign interference.

He emphasized that the Syrian people will not allow anyone to interfere in their constitution and will only accept a national constitution that meets their aspirations.

The Deputy Prime Minister reiterated that the Syrian people are the only ones who will decide their future and Trump, Pompeo and Jeffrey are not entitled to speak about it.

Muallem affirmed that Syria is determined to stand by the Palestinian people and it rejects the Israeli occupation plots to annex territories from the west Bank, adding that Israel must withdraw from all occupied Arab lands.

He asserted that Syria backs the Libyan National Army and institutions as well as Libyan sovereignty and territorial integrity. He also reiterated Syria’s support for Egypt’s national security.