Reconstruction of the Yarmouk Camp planned, another US convoy enters Syria, anti-government protests in Suwedia and anti-US sanctions protests in Lattakia. Catch up on everything that happened over the weekend. 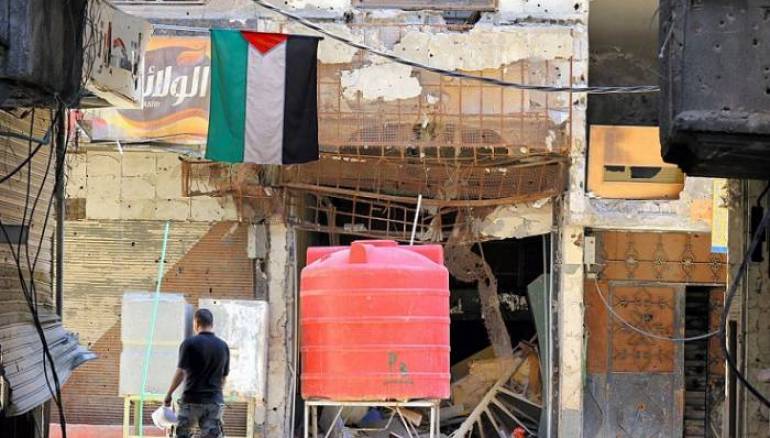 1. Syria’s Local Administration and Environment Minister Hussein Makhlouf revealed that the Damascus Countryside Governorate will remove the rubble in al-Hajar al-Aswad neighborhood, southern Damascus, to secure the return of displaced residents, adding that work is underway for the return of the residents of Yarmouk Camp, reported SANA. Makhlouf added that a low cost and quick method for rehabilitating Yarmouk Camp has been chosen.

2. The US military sent a large convoy to northeastern Syria on Saturday amid reports of an increased buildup in Hassakeh Governorate. According to Al-Masdar, the US forces entered northeastern Syria via the illegal al-Waleed Crossing that links neighboring Iraq to the Hassakeh Governorate. The US convoy reportedly consisted of tens of vehicles that carried both logistical and military equipment.

3.Hay’at Tahrir al-Sham members killed a civilian and injured two children while storming a house in the town of al-Azmo, west of the city of Aleppo, according to Smart News. Tahrir al-Sham is an Islamist opposition faction previously known as the al-Nusra Front, consisting of fighting groups including the Haqq Brigade, Jabhat Ansar al-Din, and Jaish al-Sunnah. On Friday, the brother of the victim said that at night, Tahrir al-Sham members stormed the house of his brother, Abdul Qader al-Shami, and targeted him with gunfire as he attempted to escape.

5. On Sunday, the Lattakia Bar Association organized a protest in front of the Justice Palace building to condemn the so-called “Caesar Act” and to reject the unjust coercive economic measures imposed on the Syrian people. Ayman Shabani, Chief of the Bar Association in Lattakia, told SANA that the protest was an expression of the unity of the Syrian people and their commitment to their leadership and their army in the face of all those who are trying to target their country.