What's left of the Islamic State is being attacked and harassed by the Palestinian-led Jerusalem Brigade, who are clearing hideouts and uncovering sleeper cells writes Al-Masdar. 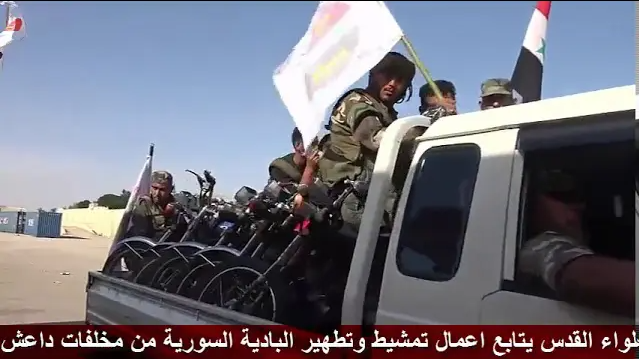 Recently, the Palestinian-led Jerusalem Brigade (Liwaa al-Quds) has been conducting a wide-scale combing operation against the Islamic State (ISIS) in the vast Syrian desert region.

Backed by the Syrian army, the Jerusalem Brigade has been eliminating ISIS hideouts and dens, while also clearing areas believed to harbor ISIS sleeper cells in the Badiya al-Sham region between the governorates of Homs, Damascus, and Deir ez-Zor.

Thus far, the operation has proven successful, as the Jerusalem Brigade has forced the ISIS terrorists to either surrender themselves, fight, or flee further into this vast desert region.

In a video released by the Palestinian-led group this week, they can be seen blowing up ISIS bases and attacking the terrorist group throughout the Badiya al-Sham region.