People in opposition held areas are decrying their living conditions and the corruption an incompetence of the ruling authorities reports Smart News. 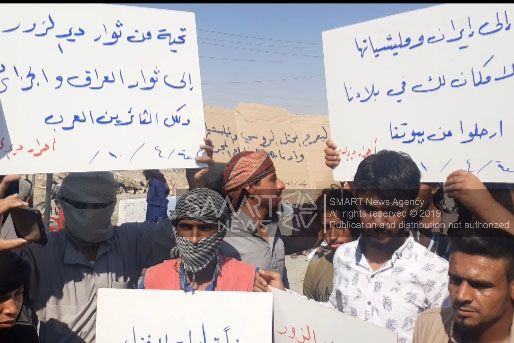 On Monday, hundreds of people demonstrated in the villages of the eastern countryside of Deir ez-Zor, an area controlled by the Syrian Democratic Forces (SDF), protesting the poor living conditions and corruption in the Kurdish Autonomous Administration’s institutions.

Activists in the area reported to Smart News that people demonstrated in the villages of al-Ezba, al-Sabha, Suwaidan, Jazira and Jadeed Ekedat, protesting the poor living conditions and administrative corruption in the local councils of the Autonomous Administration.

The sources stated that the demonstrators blocked roads and burned rubber tires, while the Asayish forces of the Autonomous Administration removed military checkpoints in the area.

On Jun. 7, 2020, people demonstrated in the town of al-Suwar, 50 kilometers east of Deir ez-Zor, protesting poor living conditions and condemning administrative corruption and poor services. The demonstrators also chanted slogans against the SDF.

In northwest Syria, dozens of people demonstrated in the city of Idleb, Sunday, against the Salvation Government after prices increased in the governorate.

Demonstrators reported to Smart News that dozens demonstrated in the city of Idleb, and chanted slogans demanding the dissolution of the Salvation Government and the expulsion of Hay’at Tahrir al-Sham and its commander, Abu Mohammad al-Jolani from the Idleb governorate.

On Sunday, the Salvation Government operating in Tahrir al-Sham-controlled areas, northern Syria, justified its decision to raise the price of bread by citing the decline of the Syrian pound against the US dollar.

On May 1, 2020, dozens of people demonstrated in the city of Idleb, demanding the expulsion of the Tahrir al-Sham and its commander, Abu Mohammad al-Jolani from the Idleb governorate, describing Jolani as a secret agent for the Syrian government.

Earlier, Tahrir al-Sham sent military reinforcements to the vicinity of Mizanaz, western Aleppo, as they prepare to open a trade crossing with the Syrian government in the area. Eight off-road vehicles carrying Tahrir al-Sham fighters with their weapons arrived at the trade crossing area, which is located between the villages of Maaret al-Naasan and Miznaz, west of Aleppo.